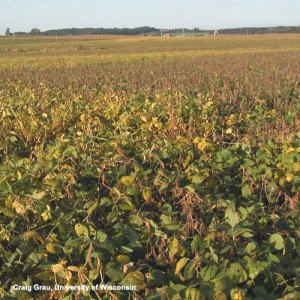 White mold of soybean, also called Sclerotinia stem rot, was discovered in Central Illinois in 1948. Although white mold became a chronic problem in Michigan, Minnesota, and Wisconsin by the 1970’s, the remainder of the North Central states experienced no problems with the disease. Even in the Great Lakes states, outbreaks of white mold were generally localized and occurred where soybeans were grown in rotation with other susceptible crops.

Beginning in 1990, however, the occurrence of white mold started to become widespread in each of the Great Lakes states, and by 1992 was prevalent throughout the other North Central states. Because of its expanded geographic range and more frequent occurrence, white mold has progressed from a sporadic disease to an annual threat to soybean production throughout the upper North Central region. Reasons for the sudden increase of white mold in the region are not fully understood, but could be related to changes in cultural practices and/or changes in the genetic base of current soybean varieties or the white mold pathogen.

Soybean producers are adapting management practices to maximize yield, and white mold is a disease of high yield potential soybeans. This situation is unfortunate because white mold penalizes the progressive soybean grower.

The growth and pathogenic activity of the white mold fungus are governed by the environment in the crop canopy, and is particularly favored by dense soybean canopies created by planting in narrow row widths, high seeding densities, early planting, high soil fertility and other factors that promote plant health.

Although not fully documented, there is some evidence that suggests the genetic base of current soybean varieties has changed resulting in greater susceptibility to the white mold pathogen compared to older varieties. Changes in herbicide usage and rate for corn, for example triazine herbicides, has been projected as another piece to the white mold puzzle. 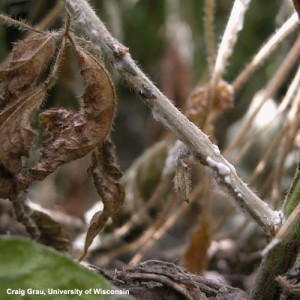 White mycelium on stems are diagnostic for white mold. This mycelium is beginning to harden into dark-colored sclerotia - the overwintering structures of the pathogen

White mold is caused by the fungus Sclerotinia sclerotiorum. The fungus is easily recognized by the presence of fluffy white mycelium (the vegetative body of the fungus) that is the source of the name white mold.  Each year, the occurrence of white mold is heavily dependent on weather conditions during soybean flowering and early pod development. Rain, cool temperatures (less than 85° F), high relative humidity and moist soil favor the growth of the fungus if it is present.

The white mold pathogen infects many broadleaf plants. Highly susceptible crops are soybean, dry beans, snap bean, lima bean, sunflowers, canola, carrots, and cabbage. Pea, potato, alfalfa, and red clover are hosts, but are examples of crops that are much less susceptible to the white mold pathogen. Examples of non-host crops are corn, small grains, and all forage grasses. Currently all forms of the pathogen are believed to be equally pathogenic to all hosts and varieties of soybean.

The life cycle of the white mold fungus begins with the germination of sclerotia at the soil surface into mushroom-like structures called apothecia.

Sclerotia germinate to form mushroom-like structures called apothecia .  Apothecia are tan, have a sponge-like texture and are 1/4 to 1/2 inch at maturity. They are found on the soil surface and form from sclerotia when the soil is moist and dim light is filtered through the crop canopy.

The number of apothecia is related to the number of sclerotia near the soil surface, soil moisture and temperature, and the timing and density of crop canopy closure. Apothecia will readily form under the canopy of a nonhost.

Apothecia of the white mold pathogen are frequently confused with reproductive structure of the bird’s nest fungus, a harmless fungus that grows on decaying organic matter. The common name of this fungus is derived from the brown, nest-like structures.

Ascospores infect senescing soybean flowers
Under the cap of the apothecia, microscopic spores (ascospores) are produced and forcibly ejected. The disease cycle of white mold begins when ascospores germinate and colonize senescing flower petals that adhere to emerging pods. Infection eventually progresses from pods to nodes and stems, resulting in a premature death of stems.  If adjacent plants come into contact with an infected plant, they may also become infected, but plant to plant spread of the pathogen is minimal and not as important as infection of blossoms. 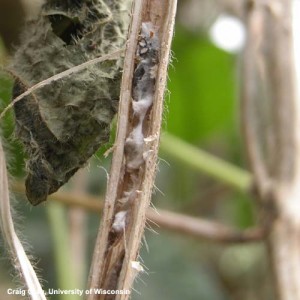 Hard, dark sclerotia are formed in lesions or inside the soybean stem. These are diagnostic for white mold.

Sclerotia will be also be positioned within the soil profile (plow layer) depending on the degree and type, or lack, of tillage.

Sclerotia are also removed from the field with the grain. Fortunately, they are not toxic to livestock, and are believed to be killed by the roasting process. All the beans that go through a roaster are brought up to temperature due to the type of flow-through process used in most machines. Temperatures of soybean grain reaches 290° F. for beans to be loaded out (flash-cooled) and 270° F for beans to be steeped in their own heat in a bin for a few hours. These temperatures are sufficiently high to kill sclerotia of the white mold fungus.

Scout for apothecia at canopy closure.
Scout the crop at canopy closure for signs of the apothecia on the soil surface.  Canopy closure generally occurs the last week of June and first week of July, and is determined mainly by row spacing. The most susceptible areas will be those where moisture collects due to fogs and extended dew periods, and pockets of poor air drainage.

Scout for signs of the pathogen on the stem

Apothecia of the white mold fungus on the soil surface. The little mushrooms are 1/4 to 1/2 inch in diameter.

Although symptoms of white mold can be observed at canopy level about 6 weeks after flowering, a closer inspection would have revealed symptomatic plants 3-4 weeks after flowering. Weather, canopy microclimate and soybean variety will modify this timetable of symptom development. Rain, cool temperatures, high humidity, and moist soil in a closed canopy favor the growth of the fungus.

Examine the stems for signs of the white mold fungus, which begin as gray to white lesions at the nodes. Lesions are 3-18 inches long, rapidly progress above and below the nodes, and can eventually encircle the whole stem.

White fluffy mycelium often cover the lesions, especially during periods of high relative humidity. This “white mold” is a good sign to look for. The characteristic black sclerotia are, in time, readily visible in lesions or inside the stem.

Foliar symptoms at the canopy level later in the season are not very diagnostic.
Leaves wilt, and the tissues between major veins develop a gray-green cast while vein tissues remain green. Leaves yellow, eventually die and turn completely brown, but often remain attached to the stem past maturity. These symptoms can be seen at pod setting in August and September.  Foliar symptoms of white mold can easily be mistaken for brown stem rot, Phytophthora root rot, sudden death syndrome, or stem canker.

Each year, the occurrence of white mold is heavily dependent on weather conditions during soybean flowering and early pod development. Rain, cool temperatures, high relative humidity, and moist soil favor the growth of the fungus if it is present. However, pathogen biology and crop management decisions interact strongly with weather to determine the risk of production losses caused by white mold.
Seasonal and long-term risk factors for white mold development

Reducing the risk of white mold and maximizing soybean yield in the presence of white mold can be achieved on a field-by-field basis by choosing management practices that: