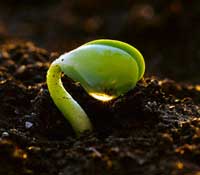 Soybean health is compromised by several plant pathogenic fungi that cause seed rot, seedling mortality, root and stem decay, or premature decline of stems and foliage. Although infection may occur early, many of these pathogens do not cause apparent symptoms until later growth stages.

Frequently, seedling health is ignored because plant populations are acceptable and stem and leaves do not express symptoms during early vegetative growth. Phytophthora sojae, several species of Pythium fungi, and Rhizoctonia solani are thought to be the most important seedling pathogens, but other plant pathogens are actively invading plants from growth stages VE to V4 as well. Infection may cause chronic symptoms, or it can remain latent and cause symptoms of plant decline during the reproductive growth stages.

Plant health assessment is important during the seedling phase. This information can be used to make adjustments in crop management in subsequent years, and may explain symptoms later in the season and less-than-anticipated yield at harvest. Be aware that symptoms caused by pathogens can be confounded by symptoms caused by herbicides and other abiotic causes of plant stress.