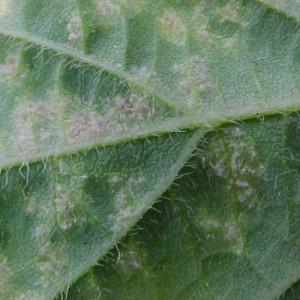 Signs of the downy mildew fungus on the underside of a soybean leaf.

Downy mildew is a common disease of soybean that occurs wherever soybean is grown.  Fortunately, however, it rarely affects soybean productivity in Wisconsin.

The downy mildew fungus, Peronospora manshurica,  is biotrophic, which means it can only grow in association with the soybean plant.  Because of this very close relationship with the soybean plant, it is capable of rapid genetic change in response to genetic changes in soybean. Thirty-three races are described for P. manshurica and the number of described races will likely increase as research continues.

For that reason, the status of downy mildew is carefully monitored during the development of new soybean varieties with new sources of soybean germplasm or transgenic technology.

Downy mildew appears on the upper surface of young leaves as pale green to light yellow spots which enlarge into pale to bright yellow spots.  The spots look slightly gray and fuzzy when viewed from below, especially during periods of high relative humidity. Younger leaves are more susceptible to downy mildew than older leaves.

The center of the spots eventually turn brown, bordered by yellow margins. Some soybean varieties express mild leaf distortion that may resemble symptoms caused by common soybean viruses. During warm, wet weather, the pathogen can spread quickly from centers of primary infection and infect 100% of the plants by the end of the growing season. 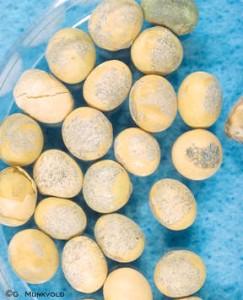 Pods can also be infected without obvious external symptoms. However, infected seed has a dull white appearance and is partially or completely covered with a pale coating of fungal spores.

Peronospora manshurica is capable of systemic infection, primarily in seedlings derived from seedborne inoculum. If contaminated seed is planted the next season, the fungus will systemically infect the seedling and cause stunting and mottling of the leaves.

The downy mildew fungus survives as oospores in crop residue and on the surface of seed. Therefore, crop rotation or deep burial of infested crop residue can reduce primary inoculum, and planting pathogen-free seed is an effective practice.

Numerous sources of resistance to P. manshurica are present in soybean germplasm although soybean varieties in grown in Wisconsin are not generally characterized for downy mildew resistance.