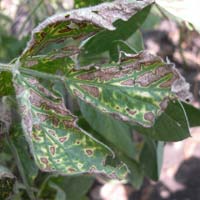 Interveinal necrosis and chlorosis of foliage are typical of sudden death syndrome, and look similar to foliar symptoms of brown stem rot.

The name sudden death syndrome (SDS) is descriptive in that normal-appearing plants turn yellow and die rather quickly after pod set.

SDS may be overlooked because its symptoms are similar to those of brown stem rot (BSR), a common soybean disease in Wisconsin.  However, SDS does not cause internal stem browning, which is a key symptom of brown stem rot.

Yield losses due to SDS range from 20-80% or more, depending on variety and stage of crop development when the symptoms first appear. Appearance of the disorder at early pod fill is reportedly more damaging than its appearance at a later stage of plant development. Yield reduction is the result of reduced photosynthetic area, defoliation, flower and pod abortion, and reduced seed size. Like brown stem rot, SDS is associated with growing conditions optimal for high yield.

SDS is caused by the fungus Fusarium virguliforme, which causes a unique set of symptoms of soybean. It is closely related to Fusarium solani, regarded as a chronic pathogen of many legumes such a pea, snap bean, alfalfa and soybean. The SDS pathogen likely arose as a mutant from the general population and is a vastly more virulent form of the species.

SDS symptoms are fairly easy to identify. Early symptoms of SDS appear in late bloom until the R6 stage (pods are filled but still green) on apparently healthy plants in circular to elongated patches within a field. The first symptoms to appear are interveinal chlorotic (yellow) blotches that progress to large irregular patches. 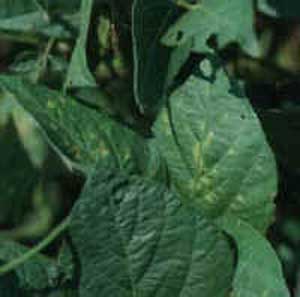 The first symptoms of SDS to appear are interveinal chlorotic (yellow) blotches that progress to large irregular patches.

Chlorotic areas eventually turn brown or white and starts to die, while the veins remain green.  The irregular shape of the spots and the green areas around the leaf veins give SDS its diagnostic pattern. Symptoms are more pronounced on top leaves.

Eventually, infected leaves drop but the petioles remain on the stems. The affected area in the field may appear scorched, as if by fire. Symptoms may be misdiagnosed as drought stress.

Stems and petioles remain erect throughout the course of the disease. Defoliation may occur, especially on the upper third of the plant. Leaf blades separate from the petioles, which remain attached to the stem. Petioles and stems stay green for a period after defoliation. Eventually, pod drop may also occur.

The leaf symptoms of brown stem rot and SDS both occur mid- to late season and are very similar.  However, the SDS also causes root rot , while root systems of plants affected by BSR remain healthy. 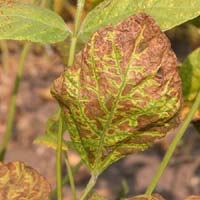 The presence or absence of internal stem browning is another key symptom to distinguish between BSR and SDS in the field. The stems of plants infected with SDS may be milky gray or milky brown, but includes ONLY the cortical cells. The pith, or inner core of the root and stem, remains white. Brown stem rot causes a brown discoloration of the pith .

The appearance of SDS symptoms is frequently associated with movement of a major weather front which brings cooler temperatures and significant rainfall to an area at or near the flowering stage. Symptoms of SDS are reported to commonly first appear 10-14 days after heavy rains that saturate soils.

The presence of SDS in Wisconsin fields has risen sharply and appears to coincide with the spread of SCN. The increased attention brought to a field by SDS frequently results in the detection of SCN. Because there is not one management option that will protect from yield losses, a multi-faceted approach is needed to manage SDS.

Both diseases can be managed by vigilant scouting for SDS and SCN, variety selection, and utilizing cultural practices that do not favor disease development. Information on SCN-resistant varieties can be found in Wisconsin Soybean Variety Test Results (UWEX A3654), but information on variety response to SDS must be obtained from seed companies.