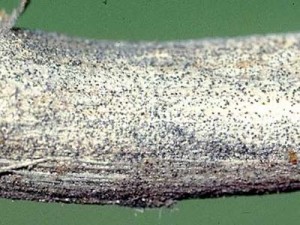 Charcoal rot is a root disease caused by the fungus Macrophomina phaseolina. The pathogen is widely distributed in soils worldwide. It is most prevalent in the southern U.S., but it can develop in the Midwest when hot, dry conditions exist.

The disease develops when there is a high level of the pathogen in the soil and when plants are under stress. It’s the hot, dry weather that creates much of the stress.

The fungus causes a general root rot in soybean, infecting the roots and lower stems. It was named from the fact that infected tissues look as if they have been dipped in charcoal dust.  It can cause a stalk rot in corn.

Results from controlled studies showed that infection by M. phaseolina can reduce plant height, root volume, and root weight by more that 50%. Damage to the root system is most evident during the pod formation and filling stages, when demand for water and nutrient absorption is high. Because diseased plants have smaller root systems, resulting seeds tend to be fewer and lighter. Diseased plants will mature several weeks earlier, which further contributes to yield loss.

The charcoal rot pathogen survives from year to year as microsclerotia (infective propagules of the fungus) in soil and infected crop residue.

Seedling infection. Root infection by germinating microsclerotia can occur very early in soybean plant development. Wyllie (1976) reported that M. phaseolina could infect up to 100% of soybean plants within 3 or 4 weeks after planting.

The fungus can continue to infect soybean plants throughout growing season and charcoal rot symptoms can be are evident in soybean plants of all ages. However, plants infected after the seedling stage generally show no above-ground symptoms until the early reproductive phase.

Aboveground symptoms at R1. Plants infected by the charcoal rot pathogen may have premature yellowing of the top leaves and premature leaf drop. This is easy to mistake for normal maturity. Plants in the driest parts of the field will likely show symptoms first. Look for unfilled upper pods and general low plant vigor. In some cases, the upper one-third of the plant may have only flat pods without seed.

Check the tap and secondary roots and lower stems for a light gray discoloration. Scrape the outer tissues and look for the presence of black, dusty microsclerotia – a diagnostic symptom of charcoal rot.

Reduce plant stress
Plants grown in conditions of high temperatures, drought or poor fertility (too high or too low) are most susceptible. Any cultural practices that minimize plant stress will reduce the risk of charcoal rot. That includes moderate plant populations and optimum fertility levels, especially phosphorus. Good fertility won’t control charcoal rot but it can reduce disease severity.

Variety selection
Select soybean varieties that are not highly susceptible to charcoal rot. Plant high quality, disease-free soybean seed. Plant the fullest-season varieties that are practical. Plants are most susceptible to charcoal rot at the beginning at flowering. The longer-season varieties tend to flower later and are in a vegetative growth stage during the early part of the hottest, driest portion of the growing season.

Rotation
In fields with a history of charcoal rot, rotate out of soybeans for two years. Small grains and corn can be planted during the two-year interval between soybeans. Corn is a host for the pathogen but generally support lower populations of microsclerotia in soil than does soybean.

Plowing or other tillage does not readily destroy the charcoal rot organism.

Microsclerotia can survive for a long time in soil.  Wyllie (1988) reported that 15 microsclerotia per gram of soil is an acceptable level for production of soybean.