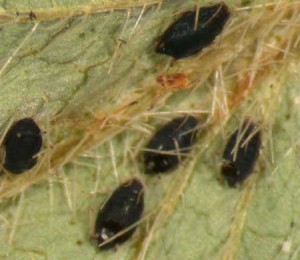 Learn to recognize evidence of parasitized aphids when scouting. The parasitoids themselves are not easily seen, but the results of their work is: the aphid mummies. Photo credit: Bob Ellingson

Pathogens, predators, and parasitoids are the three main types of natural enemies of insect pests. These include many species of lady beetles and their larvae, lacewing larvae, larvae of the syrphid or hover fly, adults and nymphs of the minute pirate bug, the incidious flower bug, Orius insidiosus, and parasitoid wasps. Many of these are present in Wisconsin.

One of the most important groups of aphid natural enemies is the parasitic wasp. Parasitic wasps are tiny, non-stinging insects that are free-living in the adult stage, but in the larval stage are parasitic on the aphid. The parasitic larvae eat their hosts from within, ultimately resulting in the death of the host insect.

Parasitized aphids often become inflated as the parasite reaches full size. The next generation wasp will emerge from the host aphid, often by cutting a circular “hatch” in the back of the aphid. When the parasite flies away, just a shell of the host aphid remains; this is referred to as a “mummy”.

The most common naturally-occurring soybean aphid parasitoid observed so far in Wisconsin is  Lysephlebus testaceipes. Soybean aphids parasitized by this wasp become tan mummies. These wasps seem to be increasing in Wisconsin since 2000, perhaps due to a shift in their host pattern towards the soybean aphid. Parasitism numbers in 2003 were estimated at about 1%. This is just a beginning of aphid control, as the amount of combined parasitism required to suppress aphids is considered to be around 20-30%. 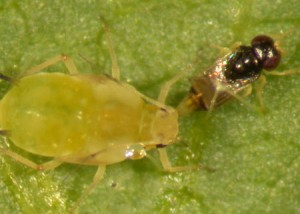 UW entomologists have released another common aphid parasite called Aphelinus albipodus. This wasp was released in 2002 and 2003, with the goal of getting a critical mass of wasps into the environment so that they can form a self-sustaining population which can spread and increase on its own. This process will take several years. The wasps successfully attack soybean aphids in Wisconsin under typical field conditions. The question remains as to how well they survive Wisconsin winters, and investigations are in place to answer that question.

Since 2005, a group of scientists from five midwestern states, including Wisconsin, and the USDA, with funding from the North Central Soybean Research Program, have been conducting research on importation biological control of soybean aphid. 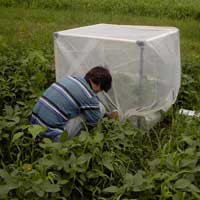 The idea behind importation, or “classical” biological control is to explore the native range of an introduced pest and identify natural enemies for importation into the United States. The long-term goal for soybean aphid biocontrol is to introduce parasitoids that become established in the Midwest and hold down aphid numbers from year-to-year with no further inputs.

Successful examples of classical biocontrol the U.S. include the introduction of parasitoids to control cereal leaf beetle and alfalfa weevil. Both of these non-native insects are now effectively suppressed by biological control, and rarely have to be managed by growers.

Over several trips to Asia, a number of aphid parasitoids have been identified as possible agents for classical biological control, and were brought back to the U.S. where they have been in quarantine. Before field testing, several years of research have been conducted on their biology, safety and impacts on non-target aphid species.