Rust spores are light and easily disseminated by winds over large geographical areas.

In Wisconsin, yellow sweetclover would be a possible candidate for an overwintering host of the soybean rust pathogen, except that since the foliage of this perennial host is usually killed by freezing temperatures, the rust fungus would also perish. So unless winter temperatures increase dramatically, Phakopsora pachyrhizi is not expected to survive in Wisconsin. 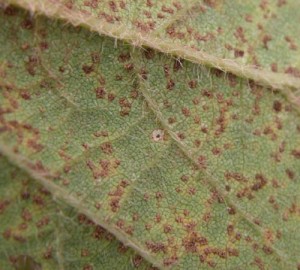 For spore germination and infection to occur, the leaf must be wet for 6 to 8 hours. Temperatures need to be between 59° and 86° F, and humidity levels should be in the range of 75 to 80%. Under these environmental conditions, pustules are formed and spores are produced within 10 to 21 days. This can be as little as 6 to 7 days after infection when temperatures are optimal at 72 to 81° F.

Rust spores, called urediniospores,  are able to penetrate the plant cells directly,  rather than through natural openings or through wounds in the leaf tissue. Thus infection is relatively quick:  about 9-10 days from initial infection to the next cycle of spore production. Under optimal conditions, a plant can go from the first signs of infection to severe defoliation in 1 to 2 weeks.

The fungus is reported to infect 95 plant species of which most are in the legume family. Hosts of most economic importance are soybean and all types of common bean including snap bean and dry edible beans.  Host range will play an important role in the epidemiology and economic importance of the soybean rust pathogen in North America.