You are here: Home / Soybean / Brown Stem Rot in Wisconsin 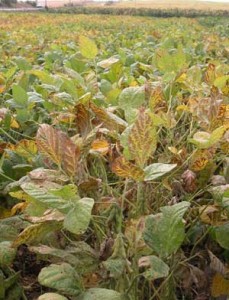 While some soybean diseases are related to stressful growing conditions, brown stem rot is most severe when conditions are optimal for soybean growth. BSR is frequently associated with fields that do not respond to management practices and have difficulty achieving yields of 50 bushels/acre. Yield losses of 10-30% are common for susceptible soybean varieties grown in management systems conducive for brown stem rot development.

Brown stem rot of soybean is caused by the fungus Phialophora gregata . The fungus infects through the roots and invades the vascular system of soybean plants. The infection eventually impedes the movement of water and mineral nutrients needed for growth. The BSR pathogen is composed of two strains, one is aggressive and causes both foliar and stem symptoms, and the second is a mild strain that causes only stem symptoms. The brown stem rot pathogen does not form specialized survival structures, thus the pathogen declines in numbers when soybean is absent from a field. 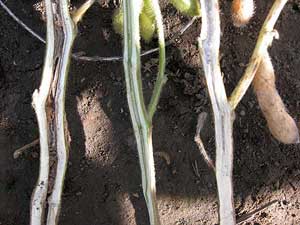 Recognition of the disease is a major problem. Browning of the internal stem and root systems of infected plants are present as early as the V4 growth stage, and intensify as the plant progresses into reproductive stages. However, there is no external evidence of BSR at this time and signs of early infection will go unnoticed unless the stems are cut open and examined.

In late July and early August (R4 to R5 growth stage), the stem browning may be accompanied by a sudden yellowing or browning of leaf tissue between the veins, wilting, and defoliation. Symptoms of brown stem rot are often confused with early crop maturity or the effect of dry soils. Excessive leaf retention at maturity is another clue that BSR may be present. Farmers and agricultural consultants should know the symptoms and controls of this important soybean disease.

It is critical to implement crop scouting for early detection of pathogen build-up. Although fungicide seed treatment will not control BSR, it is a sound practice to treat seed with a fungicide if no-till and early planting are part of the management system.

The brown stem rot pathogen survives in soybean residue previously colonized during the pathogen’s parasitic phase. Infection occurs through roots by growth stage V3 and progressively colonizes stems. Soybean is the only known host grown in Wisconsin thus, extended periods of cropping to non-hosts such as corn or small grains effectively lowers the population of P. gregata in the soil. The rate of inoculum decline is directly related to rate of soybean residue decomposition.

The incidence and severity of brown stem rot is modified by ambient and soil environments, and crop management systems. Stem and foliar symptoms are most severe when air temperatures range between 60° and 80° F during growth stages R4 to R6. Air temperatures in the 90° F range will suppress foliar symptom development. Brown stem rot is most severe when optimal soil moisture is present at R1 to R2 followed by dry soil conditions at R5 to R6. The severity of brown stem rot is greater if soils are low in phosphorus and potassium and soil pH is below 6.5. Phialophora gregata and Heterodera glycines, the soybean cyst nematode, frequently occur together and there is evidence that brown stem rot is more severe in the presence of SCN. 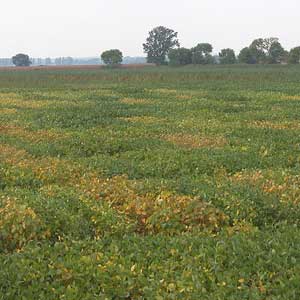 Plant BSR-resistant varieties
Commercial soybean varieties have been improved dramatically for resistance to brown stem rot. There is evidence that much of the greater yield potential realized this past decade is linked to greater brown stem rot resistance. However, susceptible varieties remain on the market, thus, variety selection is important for fields with greater risk of brown stem rot.

Short rotations increase the risk of yield loss from brown stem rot. The host range of P. gregata is limited to soybean, adzuki bean and mung bean. Therefore, two or more years of non-host crop is very beneficial to suppress BSR. Corn, small grains and forage legumes are all good rotation crop choices. Pea and snap bean provide some benefit for reducing BSR potential, but are hosts to the soybean cyst nematode and white mold pathogen, and therefore increase the risk of these diseases developing.

Many farmers in the Midwest have converted to an annual rotation of corn and soybean. An annual corn-soybean rotation is advantageous to corn, as it reduces the need for insecticides to control corn rootworms and the amount of N fertilizer required for profitable corn production. Unfortunately, soybean does not benefit as greatly from this annual crop sequence, especially for varieties that are susceptible to BSR. Thus, other management practices are needed to improve soybean health in the corn-soybean rotation.

Phialophora gregata appears to survive solely in soybean residue. Tilling soil increases decomposition of residue and will affect how much brown stem rot fungus survives from year to year. We have observed greater severity of BSR and lower yields in soybean grown under no-till, especially if shorter rotations are used. We have found that the greater disease severity associated with no-till systems is related to higher inoculum density of the BSR pathogen within soybean residue and a slowed decomposition of soybean residue when the residue is left on or above the soil surface. This combination of factors results in higher levels of the pathogen over a longer period of time.

We support the adoption of no-till systems, but encourage farmers who use this system to carefully monitor their fields for changes in the severity of brown stem rot. Longer crop rotations and shredding soybean straw with a combine-mounted shredder are effective practices that can be used to supplement resistant varieties in reducing the risk of brown stem rot in no-till systems.