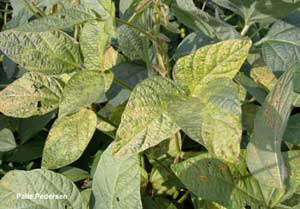 The mosaic pattern in these soybean leaves is due to infection by Bean pod mottle virus. Photo credit: Palle Pederson, Iowa State University.

Bean pod mottle virus (BPMV)  is a virus disease spread primarily by the bean leaf beetle, Cerotoma trifurcata. Seed transmission is also considered a major source of BPMV; transmission from seed to seedling is about 1%. The bean leaf beetle obtains the virus from infected seedlings, or from showy tick trefoil outside of soybean fields, and spreads the virus from plant to plant as it feeds.

The impact of BPMV on yield depends upon the time of virus infection. Early infection results in the highest yield reduction. Over a broad geographic range, yield reductions between 10% and 40% have been reported.

Soybeans can be infected with more than one virus at the same time. A synergistic reaction occurs when plants are infected with both BPMV and Soybean mosaic virus. Reduction in yield is much greater in mixed infections than either virus alone.

To determine if a virus problem exists in your field, look for the following signs:

Varieties differ in the rate of BPMV infection. For example, Spansoy 201 had less incidence of BPMV throughout a study conducted in the 2002 growing season when compared to Spansoy 250.

Complete resistance is not yet available, but partial resistance to BPMV exists in soybean varieties. Partial resistance is expressed as acceptable yield, low seed mottling and a low incidence of green stem in the presence of BPMV. We have observed that soybean varieties differ in yield and incidence of mottled soybean seed in the presence of BPMV. Another sign of virus tolerance is if a variety has had significant bean leaf beetle feeding yet few, if any, virus symptoms.

We have noted that varieties differ in the rate of BPMV infection. A lower incidence can translate into slower disease progression, thus a higher yield at the end of the season. One aspect of our virus screening is to identify those varieties with a lower incidence that would slow virus spread.

Treatment thresholds for bean leaf beetle aimed at the prevention of bean pod mottle virus are not yet available. However, here are some guidelines: 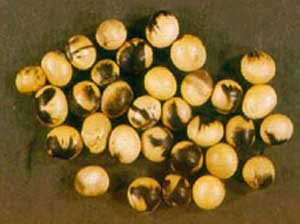 Mottled soybean seed can be a symptom of virus-infected plants. However, not all seed mottle is caused by viruses.

Seed mottling results from pigments diffusing from the hilum. It can be a symptom associated with virus-infected plants, including BPMV and SMV. Some seed are entirely black or brown, but bicolored seed are by far more common. Hilum color will determine the color and intensity of seed coat discoloration.

Mottled seeds are an issue for grain grading, especially for food grade soybeans. Mottling is associated with poor germination and yield. All mottled seed is not caused by virus, however. Insect feeding and physiological stresses can also cause seed mottle.