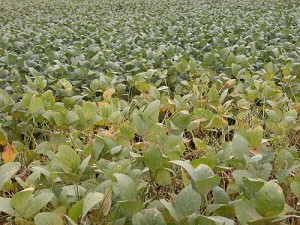 Planting resistant varieties has been very successful in managing cereal rusts on corn and wheat, and is expected to be an effective, long-term solution for soybean rust as well.

Soybean breeders and plant pathologists have been field-testing resistant soybean germplasm in the U.S. for several years now. Several hundred soybean lines are evaluated annually in eight or more different locations and researchers reported a clear sorting of resistant reactions compared to susceptible soybean varieties. Several genes for resistance have been identified and named. The next step is to make the selections, and to cross the resistant germplasm with “elite parents”—- soybean varieties with the desired agronomic characteristics.

Early planting may allow plants to reach advanced growth stages before the arrival of rust inoculum. Other cultural control practices like wider row width and reduced plant populations may reduce the length of time that leaves remain wet and potentially decrease the severity of rust. However, it is not known how big of an impact these methods may have, if any.

The impact of all diseases should be considered before changes in cultural practices are made with the goal of rust suppression. For example, early planting increases the potential of white mold throughout Wisconsin, and for yield-limiting levels of Bean pod mottle virus due to intense bean beetle activity in early-planted soybean fields.

Until rust-resistant varieties are in place, fungicides are available to protect yield loss. Early identification, the right timing, and good coverage are critical to success.  Several fungicides are registered for soybean rust and more are likely to be granted.

The most definitive and comprehensive source of information can be found in a 50-page publication called Using Foliar Fungicides to Manage Soybean Rust.  Prepared by a group of soybean pathologists working in many regions of North America, it covers the factors involved in making fungicide spray decisions, choosing fungicides,  and applying fungicides effectively, with many illustrations, tables, and charts.  It is updated regularly — the most recent edition (2008) is available online.