You are here: Home / Soybean / Phytophthora Root and Stem Rot 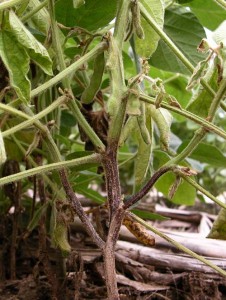 Browning of the stem, progressing up from the soil line, is diagnostic for Phytophthora. (Click on image to view a larger version).

Phytophthora root and stem rot is rapidly becoming a very destructive soybean disease in Wisconsin. Two major factors are contributing to the increased severity of Phytophthora: the soybean acreage is increasing and, consequently, soybeans are planted more frequently, and many races of the Phytophthora fungus exist in Wisconsin soils.

The disease is caused by the fungus Phytophthora sojae (synonym=Phytophthora megasperma f. s.p glycinea). The Phytophthora organism can kill plants at all stages of growth, or infected stands may survive but are less productive than healthy stands. Infection by Phytophthora sojae generally occurs in fields with poor internal drainage, but it can occur in normally well-drained fields that are saturated for 7 to 14 days due to excessive rain.

The nodules formed by beneficial nitrogen-fixing bacteria are often destroyed in Phytophthora-infected plants and the plants become yellow, partially due to N deficiency. The soybean variety, the race(s) of the Phytophthora organism present, and the growing conditions will determine whether the stem- rot phase or the root-rot phase will be most prevalent.

The Phytophthora organism can infect soybean seeds, causing seed rot (pre-emergence damping off), or it can cause yellowing, wilting, and death of seedlings as they emerge (post-emergence damping off). Infected plants are easily pulled from the ground because of rotting roots. It is difficult to distinguish Phytophthora root rot from Pythium root rot at this stage because both diseases cause root rot and seedling death. Generally, Pythium is active in cold soils, and Phytophthora active in warm soils.

During the stem rot phase of the disease, infected stems of older seedlings in the primary leaf stage may become water-soaked and eventually the leaves will turn yellow, wilt and die. As plants age, they die more slowly after infection. Plants infected before flowering will yellow, followed by wilt and death. The leaves remain attached after death. A key diagnostic symptom of infection by Phytophthora sojae is a brown discoloration that progresses 6 to 12 inches up the stem from the soil line. Diseased root systems are smaller than healthy plants, and the taproot and lower stem are internally discolored.

The root rot phase of Phytophthora root rot is not as readily recognized as the killing stem rot phase. Although less drastic in appearance, the root rot phase can greatly reduce plant productivity. Infected plants in the root rot phase will be a lighter green, and may be stunted and exhibit uneven growth. These symptoms are cause by the diseased root system which is less efficient in supplying the plant with water and nutrients. The nodules formed by beneficial nitrogen-fixing bacteria are often destroyed in Phytophthora-infect plants and the plants become yellow, partially due to nitrogen deficiency. The soybean variety, the race(s) of the Phytophthora organism, and the growing conditions will determine whether the stem-rot phase or the root-rot phase will be most prevalent.

Monitor the performance of the varieties you choose. When optimum disease conditions develop later in the growing season, scout those areas of the fields to look for stem rot development. If a large number of plants with Phytophthora stem rot are found, choose varieties with a different Rps gene and higher levels of partial resistance for next year. This pathogen does adapt to the Rps genes, but it is a slow process. Careful monitoring of plant performance is all that is needed.

Race-specific Phytophthora resistance genes and their effectiveness in Wisconsin

Field resistance, also called field tolerance, is present at different levels in most soybean varieties marketed in Wisconsin. For example, even if a variety has a specific resistance gene that may not be effective, such as Rps 1a, against the races of Phytophthora sojae present in a field, the variety may perform better than other varieties with this gene because it has an adequate level of field resistance to Phytophthora. Field resistance can be overcome by high disease pressure especially in the seedling stage.

Phytophthora root rot is most effectively managed by avoiding the most susceptible soybean varieties. The ability of varieties to resist Phytophthora infection can be enhanced, however, by the following practices:

Best results are obtained with a fungicide containing metalaxyl or mefenoxam (Metalaxyl-M), such as Apron®, or Ridomil®, in combination with field resistant soybean varieties. Seeds can be treated with the fungicide or they can be used as a soil treatment. Follow the instructions on the fungicide label.