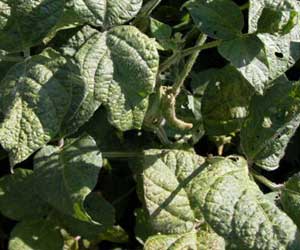 Soybean mosaic virus (SMV) and Alfalfa mosaic virus (AMV) are virus diseases of soybean that are transmitted by aphids as they feed on plant sap. General symptoms of SMV and AMV infection are plant stunting, leaf distortion, rugosity and mottling, reduced pod numbers and seed discoloration.

Agronomic Impact
Our experience over the past few years suggest that SMV does not generally affect yields. The major concern about this disease is seed quality.

However, soybean plants are commonly infected with more than one virus, which increases risk of yield loss and lower seed quality. SMV and AMV often occur together in the same plant. Tobacco streak virus and Bean pod mottle virus (BPMV) have also been found in multiple infections. 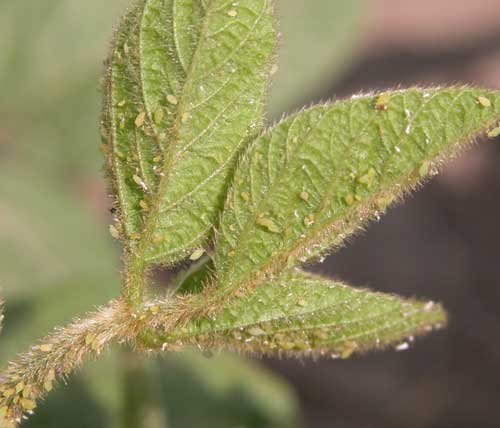 Numerous aphid species, including the soybean aphid (Aphis glycines) transmit SMV from plant to plant as they feed.

A recent cooperative study in Iowa and Wisconsin, funded by checkoff dollars, was conducted to determine if foliar application of insecticide recommended to suppress aphid populations would also reduce disease caused by soybean mosaic virus.

Data showed that disease control cannot be obtained, even though aphid populations were suppressed well. The reason is that the insecticide does not eliminate the impact of numerous aphid species immigrating into the soybean field from transmitting the virus.

The study also found that the colonizing form of the soybean aphid had little additional impact on disease spread, which was good news. So, since it doesn’t take a lot of migratory aphids to generate a problem, the introduction of the soybean aphid into Iowa and Wisconsin will probably not make the problem worse.

However, disease management cannot be obtained through attempts to control the aphids that transmit the virus.

The solution? Disease resistance. Growers are encouraged to ask their seed dealers about resistance to virus disease, and this remains a high research priority for us. The bottom line is that you shouldn’t spray an insecticide below the soybean threshold since using an insecticide will only suppress the vector but not the disease and may make the virus problem worse.