Over the last week concerns have been increasing over corn diseases as we are at the critical time to make fungicide application decisions. See my previous post about the early onset of northern corn leaf blight (NCLB) in Wisconsin in 2016 by CLICKING HERE. While NCLB can be observed in many corn fields in the state, it can be difficult to find. The hot weather this year has managed to keep that disease in check. While now is a good time to scout and make spray decisions, remember that it would take 50% or more of plants in the field with 10% or more of the ear leaves covered with lesions of NCLB prior to the milk growth stage before significant yield loss will occur.

Just this week, the University of Wisconsin-Madison Plant Disease Diagnostic Clinic (PDDC) positively confirmed the first Goss’s wilt sample of 2016. This sample came from Grant Co. Other samples have arrived, but no definitive confirmation has been made in other counties in the state. For information on Goss’s Wilt you can visit my previous posting from 2015 by CLICKING HERE. 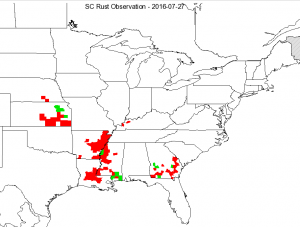 Figure 1. 2016 Southern Rust Advancement in The U.S. as of July 27. Red highlights indicate counties where southern rust has been confirmed.

Southern rust continues to be a disease to scout for in Wisconsin. No positive confirmations have been made in Iowa, Illinois, or Wisconsin. However, the disease has been confirmed in parts of Nebraska (Fig. 1). We have scouted several fields of dent corn and also sweet corn. Only pustules of common rust have been observed in these fields. Conditions have been suitable for this disease over the last several weeks. Remember that rust pathogens have to be blown in from the south. The inoculum of the fungi that cause these diseases do not overwinter in Wisconsin. To learn more about the two types of rust that can affect corn in Wisconsin and how to manage them, CLICK HERE to visit my post from last week.