I was hoping that I would write this article later in the year. But it has happened relatively early for us. We have positively confirmed northern corn leaf blight (NCLB) on field corn at about the V7-V8 growth stage near Janesville, WI this week. This is a bit early for us, however, not entirely surprising given the levels of residual inoculum from the fungus that causes NCLB left from 2015 in many fields and the cool wet conditions we have had this spring. The situation has been similar to that in Iowa. Dr. Alison Robertson also reported the first find of NCLB in southeast Iowa this week. While this find is relatively early for Wisconsin, I don’t think the world is going to come to an end. Patience will be key over the next couple of weeks. I’ll explain why folks should be cautious in making management decisions below. 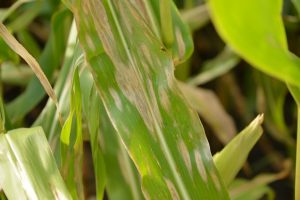 What is the Organism that Causes Northern Corn Leaf Blight (NCLB)?

A fungus called Setosphaeria turcica (synonym: Exserohilum turcicum) causes NCLB (Fig. 1). The fungus loves it wet and cool. The fungus is most active when wet weather coincides with temperatures between 65 F and 80 F. During these conditions, the fungus will readily make microscopic spores (called conidia) inside the symptomatic areas of leaves and those spores (Fig. 2) will get splashed onto more leaves. Therefore, the disease typically moves form the lower canopy, up the corn plant as the season progresses. When temperatures get above 80 F and it is dry, growth and spread of the fungus slows dramatically. Remember the disease triangle?  It takes three things for a plant disease to occur – susceptible plants, fungal inoculum present near those susceptible plants, and favorable weather. Early this season, all three legs of the triangle were present. We have lots of residual inoculum left from 2015, we have lots of corn planted again in many fields that had corn last year, and we had cool rainy conditions early on this season. However, as we think about the disease triangle moving forward, and look at forecasts over the next 7-10 days, weather is not going to be conducive for the NCLB fungus. Temperatures are forecasts to be above 80 F and there isn’t much rain in site. Without the weather component of the triangle, fungal growth, spread, and subsequent disease development will be halted. 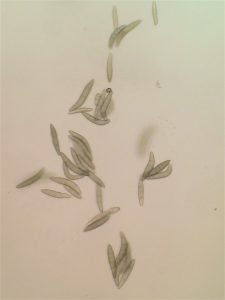 Figure 2. A photo-micrograph of spores produced by the NCLB fungus.

What should I do About Managing NCLB in 2016?

Farmers and consultants should start actively scouting corn fields in Wisconsin and keep track of disease and disease development. Remember, that while the disease is manifesting early, it is currently affecting leaves that will be in the lower canopy of the plant and are not responsible for a large portion of grain yield. While I hate talking about threshold levels for managing disease, it can be helpful in your decision making process to know what might be severe disease. While scouting look in the lower portion of the canopy. If some symptoms are present in the lower canopy, make a visual estimation of how frequent (percentage of plants with lesions) NCLB is in a particular area and how severe (how much leaf area is covered by NCLB lesions.  The lower leaves aren’t responsible for much yield accumulation in corn, but spores produced in NCLB lesions on these leaves can be splashed up to the ear leaves where disease can be very impactful. So by scouting the lower canopy and getting an idea of how much disease is present, you can “predict” what

Figure 3: A computer simulation of 5% NCLB severity on a corn leaf.

might happen later on the ear leaves to make an informed spray decision. The other consideration you should make while scouting is the resistance rating that the hybrid has for NCLB. If it is rated as resistant, then NCLB severity might not be predicted to get very severe, while in a susceptible hybrid, NCLB might be present on 50% or more of plants at high severity levels. Note however, that even if a hybrid is rated as resistant, it can still get some disease. Resistance isn’t immunity! If NCLB is present on on at least half the plants and severity is at least 5-10% and weather is forecast to be rainy and cool, a fungicide application will likely be needed to manage the disease. So what does 5% leaf severity look like? Figure 3 is a computer generated image that shows 5% of the corn leaf area with NCLB lesions. You can use this image to train your brain to visually estimate how severe the disease might be on a particular leaf. As for fungicide choice and timing, I consider that further below. 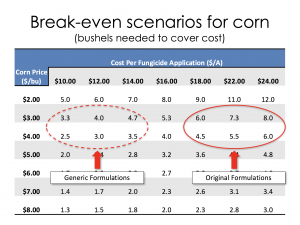 While it might seem tempting to spray fungicide now (between the V6-V8 growth Stages) because of NCLB, remember that the disease will likely slow due to the hot dry weather pattern we are about to encounter. I would encourage you to be patient and save your fungicide spray until as close to tassel (VT growth Stage) as you can. Over the last several years corn pathologists in the U.S. corn belt have conducted fungicide application timing trials on corn for grain. Programs included various products, but applications focused on an early (V5-V8) timing, a VT-R2 timing, or a combination of V5-V8 plus a VT-R2 application (two fungicide applications). Over a 6 year period and well over 1,500 observations, the average yield gain when using fungicide at V5-V8 alone was 1.9 bu/acre, while that at the VT-R2 timing was 4.7 bu/acre, and 5.6 bu/acre for the two-pass program. Now consider the price of corn and the fungicide cost. Figure 4 is a breakeven table for fungicide cost compared to corn price. You will see that I have called out a couple of possibilities depending on the price of your fungicide. If we consider the price of corn grain to be somewhere between $3 and $4 and the cost of a fungicide to be in the $10 to $14 range, you can see from the table that you would need 2.5 to 4.7 bu/acre of additional corn grain in the treated fields, over not treating, to cover the cost of fungicide. Considering these numbers, and the nationwide average bushel return when using fungicide at various corn growth stages, you can see that the VT application timing for fungicide seems to make the most sense. 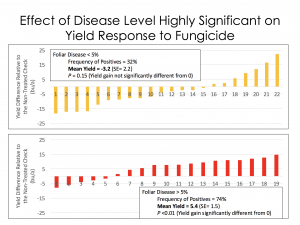 So what about fungicide application on corn in Wisconsin? We have compiled a 3-year dataset where we have looked at return on investment when using fungicide in fields where little disease was active (< 5% NCLB ear-leaf severity) or where diseases active (>5% NCLB ear-leaf severity). When NCLB was active, we found that there was a positive yield response when using fungicide about 74% of the time with an average yield gain of 5.4 bushels per acre (Figure 5). When disease activity was low, that positive yield response dropped to just 32% with little gain over zero bushels (Figure 5).

How about the return on investment in the current corn market? If we consider the current corn pricing and a fungicide cost of $10 to $14, Figure 6 shows that in Wisconsin a positive return on investment (ROI) occurs about 50-65% of the time when disease is active on ear-leaves (Figure 6). When disease is not active, the odds of positive ROI drop to just 12% – 20%. For a full discussion and explanation, I would encourage you to watch this video about corn disease and fungicide applications in Wisconsin. 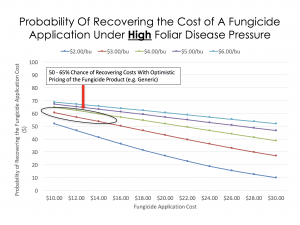 Figure 6. Return on Investment calculations for fungicide application on field corn in Wisconsin when disease activity is high.

Also be aware that in some cases, application of fungicide in combination with nonionic surfactant (NIS) at growth stages between V8 and VT in hybrid field corn can result in a phenomenon known as arrested ear development. The damage is thought to be caused by the combination of NIS and fungicide and not by the fungicide alone. To learn more about this issue, you can CLICK HERE and download a fact sheet from Purdue Extension that covers the topic nicely.

While it is earlier than normal to see NCLB in Wisconsin, I would encourage people to be patient in managing this disease with fungicide. Remember that conditions are going to be hot and dry over the next 1 – 2 weeks, which will dramatically slow the progress of NCLB. Also, considering that the best response out of a fungicide application seems to be between VT-R2, and the issues with fungicide plus NIS application between V8 and VT, I would suggest holding off for any fungicide applications until closer to VT. With the price of corn grain comparatively lower than in years past, one application of fungicide is about all that Wisconsin farmers can afford, therefore I would maximize that application and apply it as close to the VT growth stage as you can. As you approach that growth stage, continue scouting and consider if the disease is active. If it isn’t active and the weather pattern continues to be hot and dry, a fungicide application may not be needed at all.