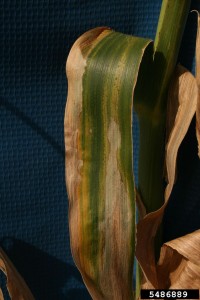 Goss’s wilt on field corn was confirmed for the first time in the 2015 season in Wisconsin this week in Grant County. Goss’s wilt has been confirmed in past years in Wisconsin, including the 2014 field season.

Goss’s wilt is caused by the bacterium Clavibacter michiganensis subsp. nebraskensis. First visual symptoms usually appear as gray or yellow stripes on leaves that tend to follow the leaf veins (Fig. 1). Often “freckles”, or brown or green irregular spots, can be observed within the leaf lesions (Fig. 2). Freckles are an excellent diagnostic symptom to confirm Goss’s wilt. Vascular tissue (Fig. 3), husks, and kernels can sometimes take on an orange hue. Occasionally, bacterial ooze or dried ooze can be observed on symptomatic leaves. This disease is often confused with northern corn leaf blight (NCLB), which is a fungal disease. Earlier this season I wrote an article on differentiating between NCLB and Goss’s will. You can visit that article by CLICKING HERE. 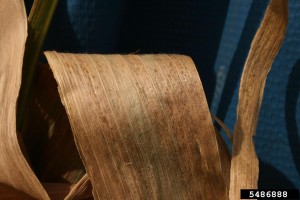 Factors that Cause Disease Development

The Goss’s wilt bacterium overwinters in old corn residue. The bacterium enters the plant through wounds or natural openings. Yield losses will depend on the susceptibility of the hybrid being grown. Factors that put corn fields at higher risk include:

Storms with hail and wind were prominent this past weekend in areas of Wisconsin. Fields with wind and hail damage should also be monitored closely for Goss’s wilt. This type of damage creates excellent entry points for the Goss’s wilt pathogen. 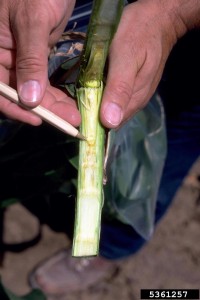 There is currently no research-based method of in-season management of Goss’s wilt. There are some foliar products being marketed for the control of Goss’s wilt, but university-based research has indicated that these products have little efficacy on Goss’s wilt in the field. Because this disease is caused by a bacterium, the application of fungicide WILL NOT control Goss’s wilt. Planting resistant hybrids in fields with a history of Goss’ wilt is recommended.  Residue management and crop rotations should also be implemented in at-risk fields. Some grassy weed hosts can be alternative hosts for the Goss’s wilt pathogen. Therefore, a sound weed management program in and around corn fields can be useful in managing Goss’s wilt. Colleagues at Purdue University have developed an excellent fact sheet covering alternative grassy weed hosts of Goss’s wilt. They also include some recommendations for controlling these weedy hosts. You can download a PDF version of the fact sheet by CLICKING HERE.