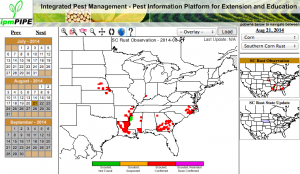 I have spent the last several days rating and scouting corn and soybeans in the southern tier of Wisconsin. There are a few active diseases out there to keep track of.

In field corn we have found a few fields with low levels of northern corn leaf blight (NCLB). Levels of NCLB seem to be a bit higher in southwestern Wisconsin. Severity on lower leaves in field corn was in the 10 – 15% range, with no damage apparent on ear leaves. Around the Arlington, WI area, NCLB is very limited with only a few lesions evident every 100 ft. or so.

Eyespot is becoming more evident in field corn.  In fields with corn debris from a previous crop, the severity levels are in the 25-30% range on lower leaves and 10-15% on ear leaves.

Low levels of common rust (less than 5%) can also be found on some field corn hybrids in Southern Wisconsin.

For more information about corn diseases in Wisconsin, see my previous article by clicking here.

Several fields with severe epidemics of NCLB on sweet corn have been reported.  These were late-planted fields. Sweet corn is generally more susceptible to NCLB than field corn. Common rust and eyespot can also be found at varying levels on sweet corn in the central and southern portion of Wisconsin.

In research plots at the Arlington Agricultural Research Station, sweet corn planted on June 25th is beginning to tassel. Levels of NCLB are currently low in this field, but common rust is increasing rapidly. Some leaves have 20-25% severity. Any late-planted and/or susceptible varieties of sweet corn should be monitored closely for foliar disease and any decision to spray fungicide should be made by the tasseling/R1 growth stage.

The most widespread disease on soybean that we have observed is Septoria brown spot.  Overall levels of Septoria brown spot are low, and can mostly only be found on lower leaves, which is typical for this disease. In many cases a fungicide specifically for this disease is not warranted in Wisconsin, unless there are factors that might lead to increased levels of severity, including continuous soybean rotation, very susceptible varieties, or extremely conducive weather. Most soybean fields are past the R3 growth stage , when a fungicide application might be beneficial for control of foliar diseases. However, this disease should be monitored in fields that were planted late.

Downy mildew has also been observed on soybean in various areas from central to southern Wisconsin. Fungicide application for control of this disease has not proven beneficial in university research trials. Therefore, fungicide application is not recommended for this disease under most circumstances. In soybean fields that are irrigated, the frequency between irrigation events should be lengthened in order to reduce the levels of downy mildew. Warmer, dry weather will also further reduce the level of downy mildew. 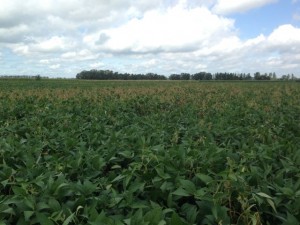 Figure 2. Damage from white mold in a soybean field under irrigation.

Active white mold has been found in fields in the central and southern portions of Wisconsin. Severity levels vary greatly depending on the fields and level of previous infestation by the white mold fungus. We have observed levels ranging from a few plants in spotty areas of a field to widespread damage with plant mortality across the entire field. The latter case was in a field with a history of white mold and frequent overhead irrigation (Figure 2). Application of fungicide for control of white mold is not recommended after the R3 growth stage. However, fields should be scouted and damage noted to facilitate future planting and management decision in that field. Fields with white mold should be harvested after fields that do not have white mold. The black survival structures (sclerotia; resemble rat droppings) of the white mold fungus can be easily spread on combines from one field to the next. If harvesting white mold infested fields last is not feasible, care should be taken to thoroughly clean combine mechanisms where soybean trash and debris can be trapped, between fields. For more information about white mold and management of the disease, click here.  To watch a short video about white mold you can click here.

Other diseases such as brown stem rot, sudden death syndrome, and stem canker have been found at extremely low levels in soybean fields in Wisconsin this season. This situation should be monitored closely as soybeans approach the R6 and R7 growth stages. These two diseases may become more apparent at that time. Again, good record keeping of where these diseases are found can facilitate future management decisions for those fields.

Goss’s Wilt Confirmed for First Time in 2014 in Wisconsin