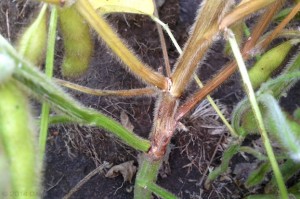 While traveling to soybean fields around Wisconsin this past week, we have noticed quite a bit of stem canker showing up. The UW Disease Diagnostic Clinic has also received several samples of soybean in which the disease has been confirmed.

Cool, wet conditions in the spring and early summer favor infection by the northern stem canker fungus. The symptoms of the disease become apparent later in the season. Considering the cool and rainy weather that has been prevalent over much of the state this season, it isn’t surprising that northern stem canker is prevalent. 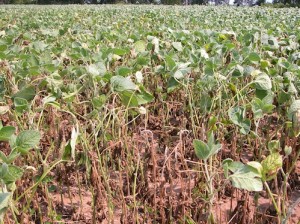 Spores of the stem canker pathogen originate mostly from soybean debris from the previous crop. Therefore, severity of northern stem canker can be higher in fields with minimal tillage. Burying debris can help reduce the severity of the disease. Stem canker can also be more prevalent in fields with high fertility and high organic matter.  Stem canker-resistant varieties are also available. Choose varieties with the highest resistance rating possible within the appropriate maturity group for your area. Soybeans rotated with alfalfa may also have a higher incidence of the disease, because alfalfa is an alternate host of Diaporthe. Fungicide application is not recommended for this disease.