The 2019 silage corn harvest is finally starting to ramp up in Wisconsin. With the excitement of finally getting into the field comes the need to be aware of the corn disease situation this season. As most of you will remember, the 2018 field season was an extreme challenge when it came to making quality corn silage in Wisconsin. Foliar diseases of corn, forced the plants to lose photosynthetic capability pre-maturely, resulting in cannibalization of stalks for carbohydrates to fill ears. Loss in stalk integrity meant extreme lodging, not to mention that is was a struggle to find optimum moisture in any field. Throw in frequent rains, and trying to chop on time to achieve quality fermentation was nearly impossible in 2018. The consequences of the challenging season are still being felt with poor quality, wild yeast issues, and higher than typical mycotoxin loads. So what does 2019 look like?

Foliar Disease of Silage Corn in 2019

Compared to 2018, the foliar disease situation has been less significant in 2019. However, there are still some important diseases to consider as you prepare for harvest. Statewide, gray leaf spot did appear early again this season. However, unseasonably cool weather kept this disease relegated to the lower canopy. For most fields we have visited, gray leaf spot will likely be of little impact on yield and feed quality this year. 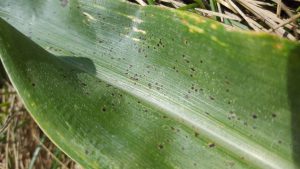 The flipside of the cooler weather meant that tar spot (Fig. 1) has become an issue again this year. Tar spot is favored by persistent temperatures between 60 and 70 F and high relative humidity averaging above 75% for a 30-day period. Periods of extended leaf wetness further facilitate increase and spread. We have been right in the ideal growth zone for the pathogen that causes tar spot since the first part of August. Over the last month, tar spot has been found in many areas of the state (CLICK HERE to view the latest national map for tar spot confirmations), leading to the 4th straight field season where this disease has impacted silage corn. While the disease has moved in later this season, compared to 2018, it is moving quickly. Tar spot can kill leaves prematurely, or reduce photosynthetic capacity. 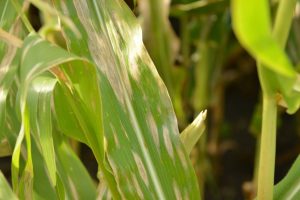 Northern corn leaf blight (NCLB; Fig. 2) can also be readily found in the upper canopy in some fields in 2019. This disease has historically been a more significant problem on silage hybrids, increasing when the weather is cool and the humidity high. Depending on the severity and interaction of both NCLB and tar spot, these diseases can influence whole plant moisture levels and also cause stalk-cannibalization, leading to increased risk for lodging. As you prepare to chop silage, scout fields to understand the severity of foliar disease levels along with whole plant moisture and kernel maturity. Fields with the highest levels of foliar disease should be closely monitored for whole plant moisture and prioritized for harvest first. Then work your way to those fields with less visible disease.

Ear rots and mycotoxins of silage corn in 2019 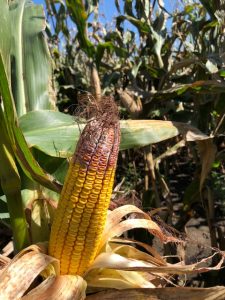 In 2018, corn production in Wisconsin was also plagued by high levels of Gibberella ear rot (Fig. 3) and high levels of deoxynivalenol (DON or vomitoxin) in finished grain and silage. Remember that vomitoxin is a secondary metabolite produced by the fungus that causes Gibberella ear rot. We believe that 2019 will be another year with high levels of Gibberella ear rot and vomitoxin levels. Weather has been wet, especially during silking on late-planted fields in 2019. This increases the risk of Gibberella ear rot. Furthermore, the fungus that causes Gibberella ear rot can cause Fusarium head blight (FHB or scab) in wheat. Vomitoxin can also accumulate in wheat grain resulting in unusable grain, or grain subjected to dockage at the elevator. The 2019 wheat season saw high levels of FHB in winter wheat, with subsequent reports of high levels of vomitoxin. Anecdotal reports of very high DON levels have been reported in wheat straw harvested in 2019. This situation further substantiates the possibility that corn might also be hit hard with Gibberella this year. When scouting fields, pull back some husks to see if there is visible ear rot. Note these fields where high levels of severity exist. Also, check fields for lodging and assess stalk integrity. The fungus that causes Gibberella ear rot can also cause Gibberella stalk rot. We also know that from some preliminary research, vomitoxin can accumulate in the stalk portions of the plant in addition to the ears. Fields with high levels of ear rot and/or stalk rot should be prioritized for harvest first. You might also consider keeping silage from these higher-severity fields separate from other fields you harvest. Also consider testing for nutritive quality and mycotoxin load as you chop silage, so you know how much vomitoxin is present and potentially from which fields. Information on testing grain and silage can be found by clicking here. An additional list of testing labs can be found in A3646-Pest Management in Wisconsin Field Crops in table 2-16. Remember that mycotoxins like vomitoxin are very stable. They cannot be removed by heating or freezing. When storing corn grain for long periods of time, we recommend drying grain down to 13%. This will help stop the continued growth of the fungus that can cause vomitoxin and reduce any subsequent accumulation of the mycotoxin. In silage corn production, harvesting at optimum moisture and packing the bunker and inducing fermentation and anaerobic conditions as quickly as possible will limit any further growth of the fungus and any additional accumulation of vomitoxin.

If you sprayed silage corn with fungicide in 2019, this might help reduce the levels of foliar disease, ear rot, and vomitoxin levels. However, it will not “cure” the situation nor is it anywhere near perfect. Research in 2018 demonstrated that fungicides could reduce disease levels, but in a year when weather conditions were conducive for ear rot and vomitoxin accumulation expectations needed to be lowered. In 2018 certain fungicide programs had the capability of reducing vomitoxin levels by 50% or more, but that still meant that a lot of the silage made was still considered unacceptable for feeding due to high vomitoxin levels. Remember that hybrid choice, in addition to treating with fungicide, can play an important role in how much vomitoxin is present and the nutritive value of the finished feed.

What are the impacts of poor silage quality and mycotoxin accumulation?

Animal nutritionists have observed many impacts of mycotoxin and microbial growth challenges in animals, including dairy cattle. Performance and health issues can range from milk fat or milk protein percentage decreases, to decreased milk production and all the way on up to feed refusal, intestinal or gut hemorrhaging, and death. For this reason, nutritionists have devised guidelines for dietary limits of some mycotoxins to reduce harm to the animal. Dr. John Goeser has assembled the “Mycotoxin Guidelines and Dietary Limits” fact sheet to help producers better understand the potentially harmful toxin levels in the total diet (DM). You will see in that chart that for vomitoxin (DON), the suggested total mixed ration (TMR) concern limit is just 0.5 to 1.0 ppm for dairy cattle. The fact sheet also provides a helpful formula to understand the contribution of toxin in a particular component of feed, relative to the total diet.

Also recognize microbial growth (mold, yeast and negative bacteria) challenges will increase with wetter conditions. Both mycotoxin load and microbial contamination need to be checked if performance or health appear challenged for your herd. Start by checking the TMR and then work backward from there with your advisory team.

We are expecting a prolonged harvest this year due to unprecedented planting growing conditions earlier this season. As discussed previously, step up your crop scouting efforts to optimize harvest this year. Consider using the approach discussed in this recent Hoard’s Dairyman HD Intel newsletter to be proactive and stay in control this harvest.

Should I Be Applying Fungicide to My Fall Forage Oat Crop?

Soybean Disease Considerations As the 2019 Harvest Approaches
Scroll to top