The 2018 corn growing season can be summed up by saying it has been challenging. In Wisconsin, corn diseases have kept producers and agronomists moving to try to manage multiple issues for much of the summer. Early in the season gray leaf spot (GLS) moved in quick, followed by onset of a new disease called tar spot (TS), then northern corn leaf blight (NCLB) reared its head in August. This was then followed by high levels of ear rot in some fields. This is the first season that I have had to rate four diseases in one research trial. While GLS, NCLB, and TS create their own unique management challenges they can also stress the corn plant which results in secondary issues such as loss in stalk integrity or a plant that is left susceptible to other pathogens. I have written a previous article describing some of these issues, and how to deal with them.

To manage some of these foliar issues, increasing interest has been placed on using fungicides, especially in grain corn. Over the last several seasons, interest is growing from dairy producers who are also treating corn silage hybrids with fungicide. Why all the interest in treating silage corn with fungicides? Some of the intent is to improve feed digestibility. Dr. Felipe Cardoso’s animal science laboratory at the University of Illinois has published several peer-reviewed papers describing the physiological changes in the corn plant treated with fungicides, that result in improved feed digestibility. In those studies, yield was often not directly impacted by the fungicide application, but fibrous changes in the corn plant improved feed conversion to milk production in cows fed silage corn treated with fungicide (Haerr et al., J. Dairy Sci., 2015; Kalebich et al., J. Animal Feed Sci., 2017). Our laboratory at the University of Wisconsin-Madison is also interested in the effects that fungicides might have on mycotoxin accumulation in silage corn hybrids. We are especially interested in the accumulation of deoxynivalenol (DON or vomitoxin). In corn, DON is primarily produced by a fungus called Fusarium graminearum. Fusarium graminearum can cause Gibberella ear rot (Fig. 1) and also Gibberella stalk and crown rot of corn (Fig. 2). 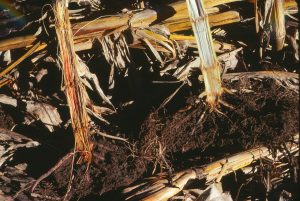 Animal nutritionists have observed many impacts of mycotoxins on animals, including dairy cattle. These can range from simple reductions in milk production all the way on up to feed refusal, hemorrhaging, and death. For this reason, nutritionists have devised guidelines for dietary limits of some mycotoxins to reduce harm to the animal. Dr. John Goeser has assembled the “Mycotoxin Guidelines and Dietary Limits” fact sheet to help producers better understand the potentially harmful toxin levels in the total diet (DM). You will see in that chart that for DON, the suggested limit is just 0.5 to 1.0 ppm for dairy cattle. The fact sheet also provides a helpful formula to understand the contribution of toxin in a particular component of feed, relative to the total diet.

So how do fungicides affect DON in corn plants at harvest? Let’s look at some data from Wisconsin in 2017 and 2018.

During the 2017 growing season, we conducted a small-plot research trial at the Arlington Agricultural Research Station located in Arlington, WI. The brown midrib (BMR) corn hybrid ‘P0956AMX’ was chosen for this study. Corn was planted on 11 May and chopped on 13 Sep. Single applications of various fungicide products (Fig. 3) were applied at growth stages V6 (19 Jun), R1 (26 Jul), 5 days post R1 (31 Jul), and 10 days post R1 (4 Aug). Ear rot severity was assessed by visually rating five ears per plot on the day of harvest. Yield was determined by harvesting the center two rows of each plot using a small plot silage chopper with an onboard platform weigh system. Chopped sub-samples were collected from each plot and analyzed for deoxynivalenol (DON) content. 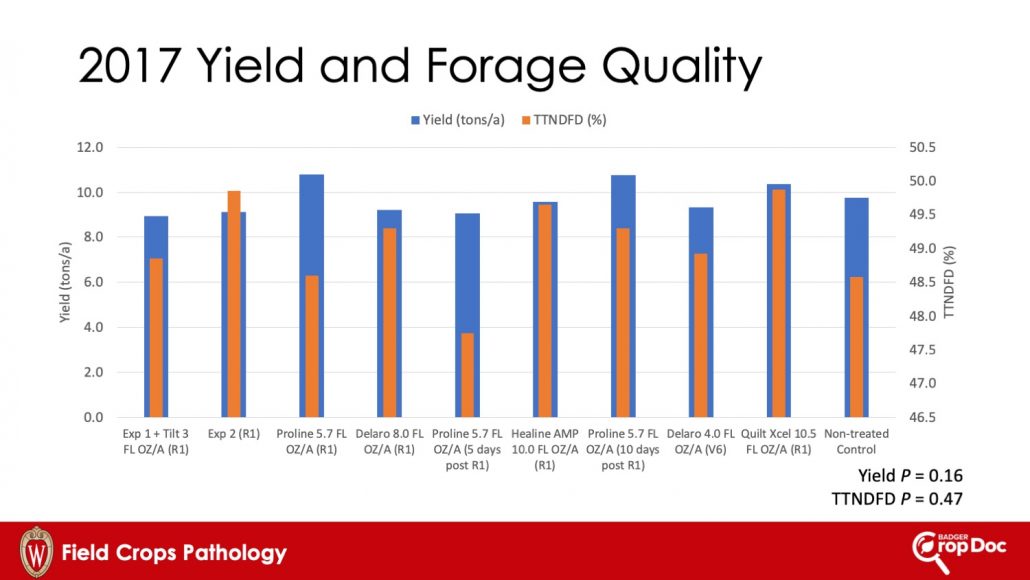 Consistent with other datasets, we found no significant difference in yield across treatments (Fig. 3). Unlike other studies, little difference in digestible fiber (TTNDFd) could be found among all treatments. This could be due to the fact that we started with a high-quality BMR hybrid, thus not readily responding to physiological changes that correspond to increased feed quality when treated with fungicide. 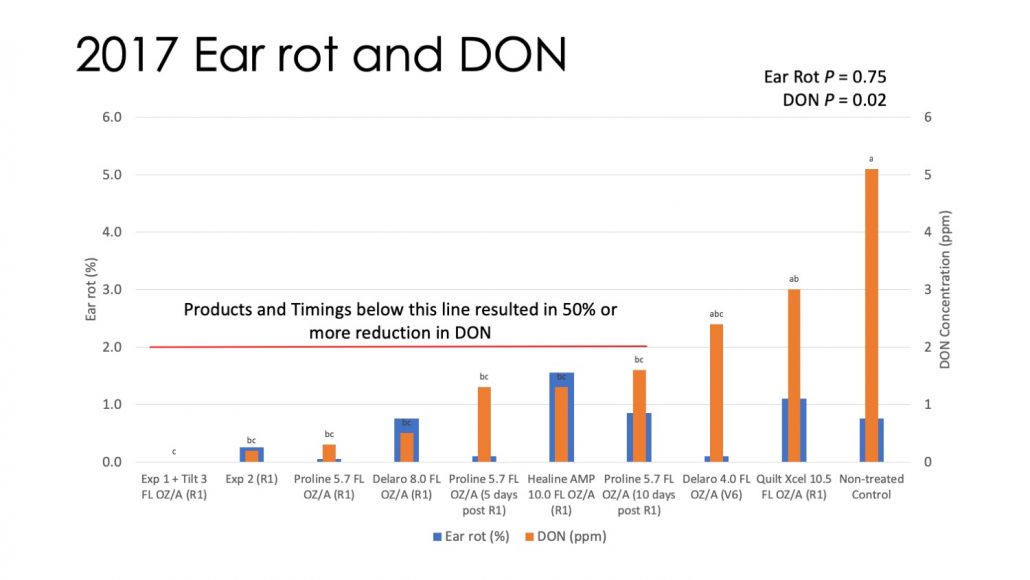 All fungicide treatments resulted in a significant reduction in DON content compared to the non-treated control, except Delaro applied at V6 and Quilt Xcel applied at R1 (Fig. 4). Application of the experimental 1 fungicide applied at R1 resulted in the lowest DON content among treatments. Remaining treatments had comparable DON levels to experimental 1 except for Quilt Xcel at R1. These results were consistent with previous data from Canada indicating that there is a narrow window of application-timing (especially when using Proline), when the goal is to reduce DON. The window of application begins at R1 (silking) and ends around 10 days after the start of R1.

In 2018, we repeated trials that we began in 2017. However, we made several modifications, including adding treatments and adjusting application timings. We also added another hybrid, in addition to repeating trials on PO956AMX. The new hybrid was another BMR, F2F627. We also made plots wider. We increased the width so that we could harvest our center two rows of plot using the small-plot chopper and also destructively sample plants on rows 2 and 5. We cut 5 plants from these rows in a subset of fungicide-treated, or non-treated plots. We then removed the ears (husks attached to ear) from the stalks. We ground the stalk portion and the ear portion and kept these samples separate, so that we had paired-samples for each of these plots. We wanted to know where DON was accumulating in the corn plant. Remember that F. graminearum can cause a stalk rot AND an ear rot. Plots were planted on May 1 in 2018. Growth stage V6 applications were made on June 15, V12 on July 11, R1 on July 18, and R2 on August 1. Plots were chopped on Sep 12. All data acquisition and sample testing was the same as in 2017, with the exception of adding the paired-samples for DON testing. Data from each hybrid were analyzed separately as these hybrids were planted in two separate blocks of the same field. 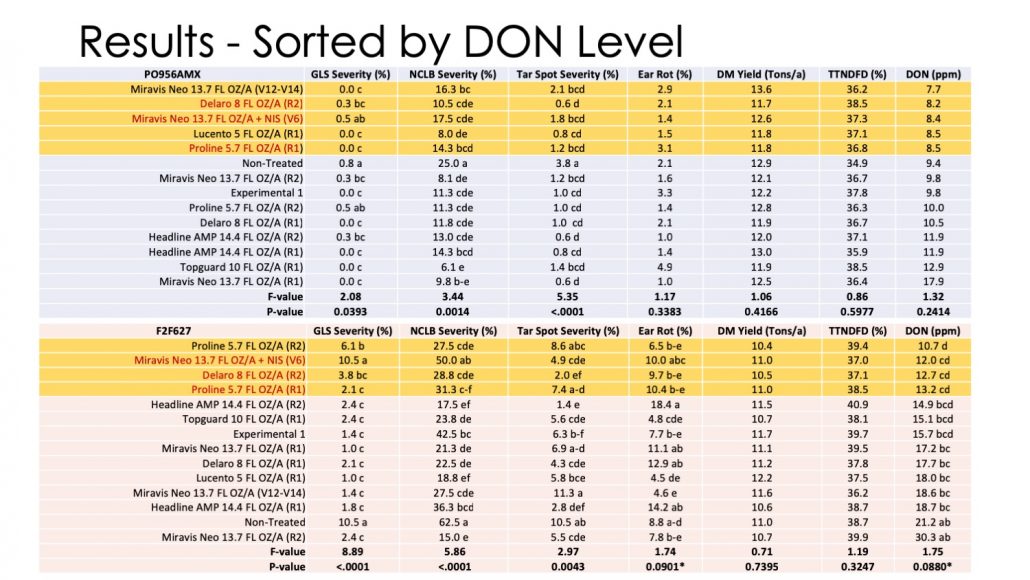 Figure 5 shows mean foliar disease, ear rot, yield, forage quality, and DON levels for both hybrids. Data are sorted by DON level and red highlights of certain products/timings are included to show which were consistent across both hybrids. Foliar disease and ear rot were higher in 2018 than 2017. Each hybrid responded a bit differently to each disease. Similar to 2018 there was little effect of fungicide on yield and forage quality. For PO956AMX, fungicide application also did not significantly affect DON levels. For F2F627 there were some marginally significant differences in DON as a result of fungicide application. Regardless, DON levels were extremely high in this field. This was a natural epidemic, indicating that the environment was very conducive for the fungus in 2018. Some products were consistent across trial in giving some reduction relative to the non-treated. These included Proline applied at R1, Delaro applied at R2, and Miravis Neo applied at V6. With that said, levels of DON were still over 7 ppm, even in better performing treatments. In years where the environment is conducive for F. graminearum, fungicide alone won’t be enough to reduce DON levels to acceptable limits. Incorporation of other techniques such as resistant hybrids will be needed.

What Part of the Plant is DON Accumulating? 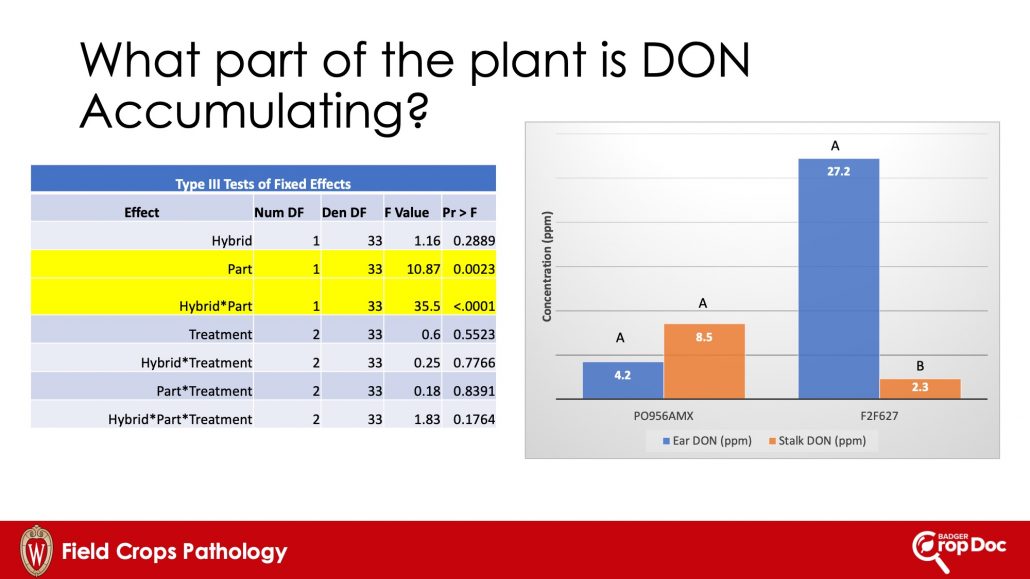 Results of our paired-sample analysis were interesting. We chose to sample plots from the non-treated and two fungicide treatments. The details of which fungicide treatments are not important here, as treatment had little effect on DON level in this analysis (Fig. 6). The part of the plant we sampled was significant, as was the interaction of hybrid and plant part. Interestingly, we were able to find high levels of DON in stalks and ears, with PO956AMX actually having twice the level of DON in stalks compared to ears. F2F627 responded differently with higher DON in ears than stalks.

We also dug a little deeper into this relationship, and conducted some correlation analysis with several parameters from these plots. Bissonette et al. (2018) reported that in wheat, DON levels in grain were positively correlated with straw DON levels. They hypothesized that this correlation was due to the fact that DON is water soluble and can be washed from the grain to the straw, in the field, during rain events. We wanted to see if stalk DON was correlated with ear DON in our corn trials, as a similar phenomenon might exist in corn. 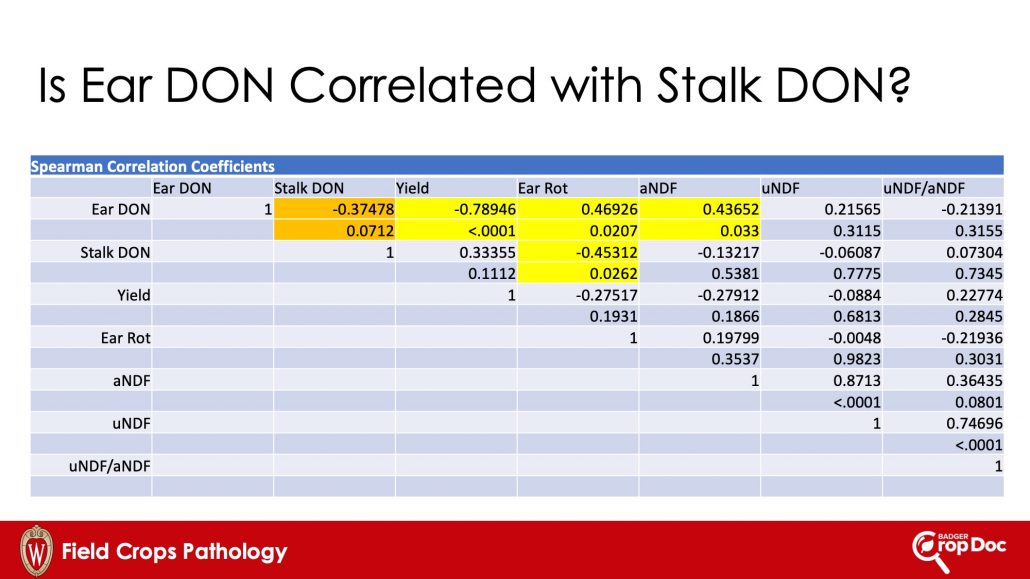 Figure 7. Spearman correlation coefficients for several parameters measured in corn plots (2 hybrids) treated with fungicide or not treated in 2018.

Figure 7 shows that while ear DON levels are correlated (either positively or negatively) with some other parameters, ear DON was not significantly (alpha=0.05) correlated with stalk DON. In fact, the relationship (while not significant at alpha=0.05) was actually negatively correlated. This suggested that stalk DON levels and ear DON levels might be originating from independent events in these corn trials. Remember that F. graminearum can cause a stalk and crown rot  AND/OR an ear rot. These different diseases can occur independent of each other. Thus, it is plausible that the stalk DON levels might be due to stalk infection and subsequent rot, that isn’t necessarily related to ear rot in corn.

What does all of this data mean? Well, first it means the Badger Crop Docs have some more work ahead of them. However, we have some interesting data that suggests the following:

1. DON can accumulate in ears AND stalks

-Farmers should test stalks for DON level if planning to feed

-Different than wheat, where water-leaching of DON may be leading to straw DON

4. Fungicide may not always reduce DON, especially in years conducive for F. graminearum or when stalk infection is a primary means of DON accumulation in the corn plant

-It might be hard to get fungicide into stalks to reduce stalk infection; Thus, DON still accumulates in the stalk portion, independent of ear infection control by fungicide applied at R1

5. Best all around fungicide timing when trying to reduce DON still likely R1 (this is dependent on product); this timing has the best chance of reducing DON in the ear, where DON can be high in some hybrids