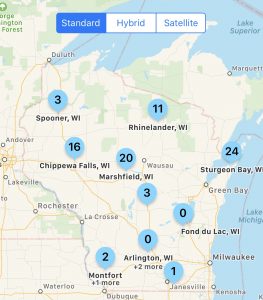 Figure 1. Tarspotter risk predictions for the state of Wisconsin on August 2, 2019.

Figure 1 shows the calculated risk from Tarspotter for August 2, 2019, for various locations in Wisconsin. As you can see, the present risk remains very low for most of the state. Continued warm and dry conditions have kept the risk low in Wisconsin. Tar spot is favored by persistent temperatures between 60 and 70 F and high relative humidity averaging above 75% for a 30-day period. We continue to scout fields in southern and southwestern WI and continue to find no tar spot in our travels. Tar spot has been observed now in multiple counties in Illinois, Indiana, and Michigan, along with one county in Iowa (Fig. 2). Continued dry weather is expected to keep this disease at non-existent or low levels in Wisconsin for the next couple of weeks.

Other Corn Diseases To Watch in Wisconsin 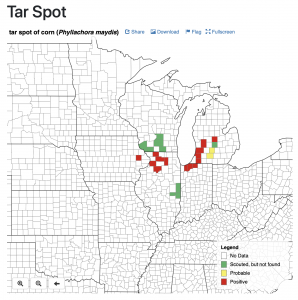 We continue to frequently find gray leaf spot (GLS) on corn. This disease is going to be problematic on some hybrids and in certain environments in Wisconsin. We are seeing GLS on ear leaves and severity is increasing. Remember, if you are going to spray fungicide, the idea is to spray preventatively before the disease reaches the ear leaves. Continue to scout fields and look in the lower canopy and watch movement of the pathogen and disease symptoms up the canopy. Optimal fungicide application timing if disease is progressing will be between VT and R3. See my previous article about making the fungicide spray decision. 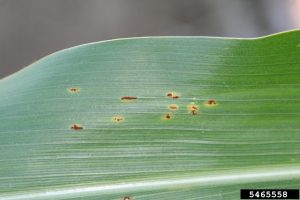 Southern rust has also been on our minds recently in Wisconsin. The disease is is caused by the fungus Puccinia polysora. Symptoms of southern rust are different from common rust (Fig. 3) in that they are typically smaller in size and are often a brighter orange color (Fig. 4). Pustules of southern rust also typically only develop on the upper surface and will be be more densely clustered. Favorable conditions for southern rust development are similar to those for common rust. high humidity and temperatures around 80F encourage disease development. However, very little free moisture is needed for infection to occur. Southern rust is typically a late-arriver in Wisconsin. When it does move in, it is usually in the southern and south-western portions of the state. Spores of this fungus have to be blown up from tropical regions or from symptomatic fields in the southern U.S. The fungus can not overwinter in Wisconsin. While southern rust epidemics can be rare events in Wisconsin, the disease can be serious when it occurs. In addition, when it occurs close to sinking, yield loss from the disease can be high. Thus, close monitoring of forecasts and scouting are needed to make timely in-seaosn management decision. 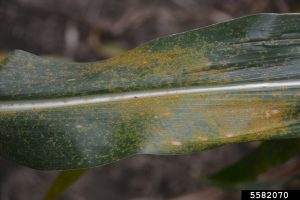 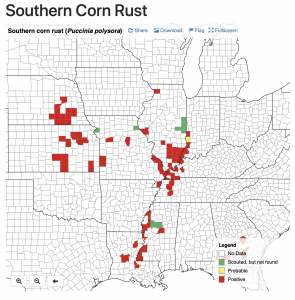 Traditionally resistance was used to manage southern rust. However, in 2008 a resistance-breaking race of the southern rust fungus was confirmed in Georgia. Thus, most modern hybrids are considered susceptible to southern rust. Rotation and residue management have no effect on the occurrence of southern rust. The southern rust fungus has to have living corn tissue in order to survive and can not overwinter in Wisconsin. Fungicides are typically used to control southern rust in parts of the U.S. where this is a consistent problem. Efficacy ratings are also available for fungicides against southern rust on the Corn Fungicide Efficacy Table. Should southern rust make its way to Wisconsin prior to the “milk” (R3) growth stage in corn, it could cause yield reductions. Growers and consultants should scout carefully through the R3 growth stage and be sure to properly identify the type of rust observed. If you need assistance in identifying rust on corn, leaf samples of corn plants can be sent in a sealed plastic bag with NO added moisture to the University of Wisconsin Plant Disease Diagnostic Clinic (PDDC). Information about the clinic and how to send samples can be found by CLICKING HERE.

Tar Spot Now Confirmed in Wisconsin in 2019
Scroll to top