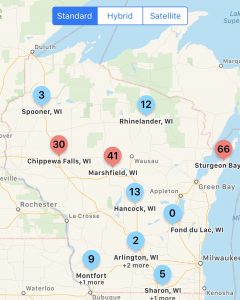 Figure 1. Tarspotter risk predictions for the state of Wisconsin on July 19, 2019.

Figure 1 shows the calculated risk from Tarspotter for July 19, 2019, for various locations in Wisconsin. As you can see, the present risk has dropped substantially over the past week, leaving much of the state at low risk. The drop is due to the high temperatures and drier conditions. Tar spot is favored by persistent temperatures between 60 and 70 F and high relative humidity averaging above 75% for a 30-day period. We have also scouted fields in southern and southwestern WI and have not found tar spot in our travels. 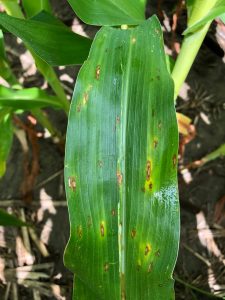 While scouting we have observed other foliar diseases of corn, including gray leaf spot (GLS: Fig. 2), common rust (Fig. 3), and northern corn leaf blight (NCLB; Fig. 4). Out fo these three, GLS has been the most consistent to find in fields we have visited. In Grant Co., GLS has made its way to the mid-canopy of some corn planted no-till in a field that had corn last season. It will be important to keep an eye on GLS and NCLB over the next couple of weeks. These two disease can become yield limiting if they reach the ear leaf of corn at high severity levels before the R3 corn growth stage. Scouting to determine the number of plants showing symptoms and the severity will be important in determining if a fungicide application at the tasseling growth stage is needed. Right now I’m most concerned about GLS and NCLB in field corn in Wisconsin, while keeping an eye out for tar spot.

What Should I Spray, and When Should I Spray for Corn Foliar Diseases In Wisconsin? Fungicide should be used to preserve yield and reduce disease level. There is no silver bullet fungicide out there for all corn diseases. However, there are many products which work well on a range of diseases. The 2019 Corn Fungicide Efficacy table lists products that have been rigorously evaluated in university research trials across the country. You can see there are several products listed that perform well on both NCLB and GLS along with efficacy against tar spot. So obviously, if a disease is present and you are trying to control the disease, you might expect more return on your investment, compared to simply spraying fungicide and hoping that there might be a yield increase. 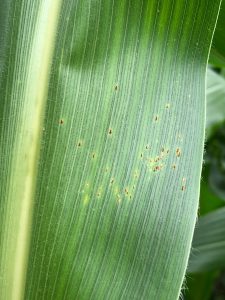 Paul et al. (2011) conducted research to investigate the return on investment (ROI) of using fungicide at low and elevated levels of disease. Data from 14 states between 2002 and 2009 were used in the analysis. They looked at 4 formulations of fungicide products across all of these trials. I won’t go into detail about all products, but will focus on one here, pyraclostrobin. This is the active ingredient in Headline® Fungicide. In all, 172 trials were evaluated in the analysis and Paul et al. found that on average there was a 4.08 bu/acre increase in corn grain yield when pyraclostrobin was used. So there does appear to be some increase in yield with the use of fungicide over not treating across a range of environments. But in our current market, will this average gain cover the fungicide application? Today’s corn future price for September has a bushel of corn at $3.76.

Let’s Take a Closer Look at Corn Fungicide Return on Investment (ROI): While most of the early work on fungicide use in corn has focused on Headline® Fungicide, much of the industry has transitioned to using multi-mode-of-action products. These would be products mostly containing strobilurin (QoI) and triazole (DMI) fungicides in the same jug. Products such as Headline AMP® or Quilt Xcel® would fall into this category. These combination products have also been fairly consistent in response in my fungicide trials. You can find summaries of these trial results here. If we consider using Quit Xcel® at 10.5 fl oz or Headline AMP® at 10.0 fl oz, the list pricing of the product alone ranges from $15/acre (Quit Xcel®) to $22/acre (Headline AMP®). If the fungicide will be flown on with an aircraft, that cost will likely add nearly $15/acre to the application. Thus, fungicide plus application would range from $30/acre to $37/acre. If we can sell corn at $3.76 per bushel then we would need to preserve 8 bu/acre to nearly 10 bu/a in yield over not treating to break even! In a recent analysis of corn yield data where DMI+QOI products were applied at the tasseling period across the entire corn belt, the average yield preservation over not treating was 7.20 bu/a. This average projection is short of the 8 bu/a minimum we would need in the scenario above. However, the probability of preserving yield in the 8-10 bu/a range in this range is estimated to be 25% – 50%. This means that if we apply Quit Xcel® at 10.5 fl oz or Headline AMP® at 10.0 fl oz aerially, we will only break even 25% – 50% of the time with corn priced at $3.76 per bushel. If we can sell our corn for a better price or make the applications cheaper, then the odds will improve, but probably not climb above 70% even under the best case scenario. We do know that in Wisconsin, the odds of breaking even do improve if NCLB or GLS are active and increasing during the tasseling period. Get out there and scout! 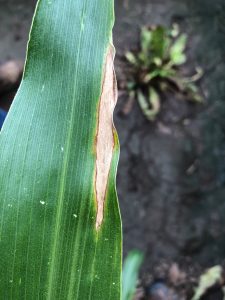 So What About Fungicide Application Timing? We can investigate this question over the U.S. corn belt using the same dataset. Applications focused on an early (V6) timing, a VT-R2 timing, or a combination of V6 plus a VT-R2 application. Let’s again focus on the QoI+DMI products. Based on observations across the corn belt the V6 timing averaged almost 3 bu/a of preserved yield over not treating. The VT application resulted in nearly 8 bu/a in preserved yield, while the two-pass program only offered a little over 8 bu/a. Clearly the higher average yield preservation occurs using a single application of fungicide at the VT-R2 timing. Wisconsin data has been consistent with this observation. Thus it is recommended that a single application of fungicide be used around the VT-R2 growth stages, when NCLB or GLS are active and increasing on or near the ear leaves.

Finally, be aware that in some cases, application of fungicide in combination with nonionic surfactant (NIS) at growth stages between V8 and VT in hybrid field corn can result in a phenomenon known as arrested ear development. The damage is thought to be caused by the combination of NIS and fungicide and not by the fungicide alone. To learn more about this issue, you can CLICK HERE and download a fact sheet from Purdue Extension that covers the topic nicely. Considering that the best response out of a fungicide application seems to be between VT-R2, and the issues with fungicide plus NIS application between V8 and VT, I would suggest holding off for any fungicide applications until at least VT.

As we approach the critical time to make decisions about in-season disease management on corn, it is important to consider all factors at play while trying to determine if a fungicide is right for your corn operation in 2019. Here is what you should consider:

1) Corn hybrid disease resistance score for NCLB and GLS – Resistant hybrids may not have high levels of disease which impact yield.

2) Get out of the truck and SCOUT, SCOUT, SCOUT – Consider how much disease and the level of severity of disease present in the lower canopy prior to tassel.

4) Consider your costs to apply a fungicide and the price you can sell your corn grain – Will you preserve enough yield out of the fungicide application to cover its cost?

5) Hold off with making your fungicide application in Wisconsin until corn has reached the VT-R2 growth stages – The best foliar disease control and highest likelihood of a positive ROI will occur when fungicide is applied during this timing when high levels of disease are likely.

Fact Sheet: A3878 – Fungicide Resistance Management in Corn, Soybeans, and Wheat in Wisconsin