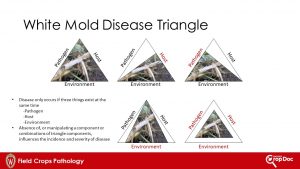 We keep getting this question, because as we write this, it is storming yet again in many locations in the Midwest. Rain, rain, and more rain has pushed back timely planting everywhere. Concern is starting to mount about not only yield loss simply from delayed planting, but what increased risk of yield loss due to disease there might be in 2019. As we consider this issue, we will use tar spot of corn and white mold of soybean as just two examples of where this could be an issue.

The Plant Disease Triangle. Remember that the plant disease triangle is the foundation for understanding how plant diseases develop and how to manage them. In order for a plant disease to occur you must have a virulent pathogen, a susceptible host plant, and favorable weather conditions to coincide at the same time. If any one of these three components is missing (or we implement a management strategy that removes or reduces one component) then a plant disease will not occur. When it comes to the host component, it not only matters that the host is generally susceptible but is also at a susceptible growth stage. Consider white mold of soybeans for a minute. All stages of soybean are susceptible to infection by the white mold fungus, but most infections occur through open flowers. Thus, the disease triangle is met when you have (1)white mold fungal spores flying around at the same time that (2)soybean flowers are open (susceptible stage), during, (3) cool and wet weather (favorable environmental condition)completing the triangle (Figure 1). The point here is that if we continue in a cool wet pattern, and delayed planting continues, we may quickly find ourselves with crops at susceptible growth stages when the weather is very conducive to disease. 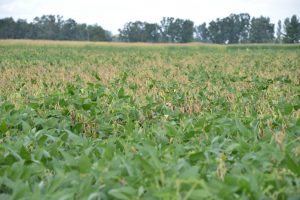 Delayed Planting and White Mold of Soybean. In 2017, we had an epic epidemic of white mold on soybean across the upper Midwest (Figure 2). One of the main reasons that the epidemic was so bad is that it was generally cool for a large portion of the season. This resulted in soybeans that moved very slowly from one growth stage to the next. When it came to flowering, soybeans bloomed for an extended period of time. This left them in a susceptible growth stage for about twice as long as normal. These cool conditions also coincided with wet weather that was favorable for the pathogen. In 2018, planting occurred reasonably on-time and we accumulated heat units quickly. Bloom started early in the season and was about half as long as it was in 2017. This meant that soybeans “escaped” infection in large portions of the upper Midwest. Fast-forward to 2019. If this cool rainy cycle persists, and planting is delayed, then soybeans may bloom later and over an extended period of time during wet/humid weather conditions. Keeping an eye on weather before and during the soybean bloom period along with consulting the Sporecaster smartphone app  can help you make the educated decision to spray fungicide or not. 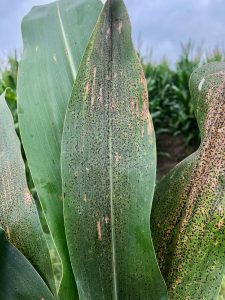 Delayed Planting and Tar Spot of Corn. In 2018 Tar spot of corn (Figure 3) created quite a stir. The epidemic was widespread and caused some significant yield losses in areas that it occurred. The tar spot fungus is residue-borne. There is also decent evidence that it can survive over-winter on corn residue (Figure 4). Our laboratories have been investigating tar spot fungal survival on corn residue collected after snow-melt in Wisconsin and Indiana. Regardless of whether there was fall tillage performed or not, survival of tar spot fungal spores (ascospores) on the residue collected ranged between 15 and 40%, with an average around 20%. These are VERY preliminary findings (and the numbers might change once we finish counting and analyzing data), but the point is that there is viable tar spot fungal inoculum present in Midwest corn fields. Therefore, one component of the triangle is met! As for the other two components, corn is being planted later than normal and conditions are cool and wet. Again, if this cycle of cool and wet holds, conditions will be favorable for the fungus. Delayed planting of corn will also push corn into conducive growth stages for the fungus to infect and cause heavy yield losses (although, we have seen infection at all growth stages as long as there was green tissue available). One of the reasons that the 2018 tar spot epidemic was so significant, was that many areas of the upper Midwest had cool and excessively wet conditions around the V6 growth stage and again near or after the VT growth stages. When foliar diseases of corn start at early growth stages (V6 or V8) the risk for yield loss can be much higher than if they start after R2 or brown silk. Keep an eye on the weather between the V6 and R2 growth stages and consult with your local extension personnel to decide if a fungicide might be warranted for corn to prevent tar spot, or other foliar diseases. 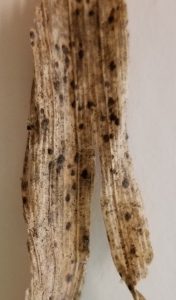 Figure 4. Signs of the Tar Spot Fungus on Corn Residue

Scouting and Watching Weather Reports Might Pay in 2019. Once corn and soybeans are planted, take the time to scout and pay attention to the weather. While thorough scouting can take time, it may be worth it in 2019. Catching a plant disease early can be the difference in being successful in managing it or not. Pay attention to the weather leading up to, and during, the critical crop growth stages. This can also help you make an educated decision about in-season application of fungicides. If it is cool and humid/rainy, and the crop is at a susceptible growth stage, then a fungicide application might be warranted. If it is hot and dry and the crop moves quickly through susceptible growth stages, then a fungicide might not be warranted. Study the disease triangle and use it to your advantage. The 2019 field season could be a year that this knowledge might be handy!