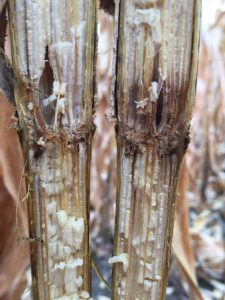 The 2019 growing season is the third year in a row where we are going to end with many challenges for Wisconsin farmers. The excessively wet weather is challenging the last of corn silage harvest, and grain harvest has barely started in much of the state. Couple this with wet weather, delayed planting, and plant stress most of the season and there is a double whammy of stalk rot and ear rot issues to contend with this fall.

What is the Primary Stalk Rot Issue in Wisconsin?

Anthracnose stalk rot (Fig. 1) has been readily apparent for Wisconsin corn growers this season. Anthracnose stalk rot is typically worse in fields in a corn-on-corn rotation, and/or no-tilled, and planted to a susceptible hybrid. Reports and observations of lodging are starting to come in. In addition, to anthracnose stalk rot, we are also seeing Gibberella stalk rot picking up . This stalk rot seems to be showing up in late-planted corn-situations and especially wet fields. This isn’t surprising given the weather conditions and level of plant stresses from compaction, slow accumulation of growing degree day units, and foliar pathogens. Impending frost in much of the state this weekend will also end the growing season, meaning that plants already damaged by stalk rot will shut down. The clock starts ticking on what can be done and lodging becomes a considerable concern.

Frosted corn for silage will begin drying at a faster and constant rate, regardless of kernel or plant maturity. The primary aim for frosted corn meant for the silo becomes achieving an ideal moisture content for ensiling. With whole-plant corn silage, the ideal moisture range is 63 to 68% however with frost damaged or killed corn, achieving this dry matter for the entire crop may prove impossible.  Actively monitor moisture during harvest and segregate the crop if moisture dips below 55%, to avoid silage storage and stability issues later on.

What should I do if I have a field with stalk rot?

In fields where stalk rot is an issue, HARVEST AS EARLY AS POSSIBLE to avoid yield losses from lodging. Silage corn fields should also be chopped as soon as possible, monitoring moisture and being sure to take extra care in packing the bunker. Delaying harvest for grain corn will increase the likelihood of lodging which will increase harvesting issues. Once conditions dry enough to allow combines to run, fields with higher levels of stalk rot and/or lodging should be prioritized for harvest.

What should I do about stalk rot for next season?

Management of of any of the stalk rots is multi-faceted. First, choose hybrids with the best resistance available. Hybrids that also have good resistance to foliar diseases will also offer an advantage when managing stalk rot, as foliar disease can stress corn plants and lead to increased risk of stalk rots like anthracnose stalk rot. Cultural practices such as crop rotation and tillage to manage surface residue can also help. Other practices that reduce plant stress such as balanced fertilization, proper planting population, providing suitable drainage, and using well adapted hybrids for your location will reduce the risk of anthracnose stalk rot.

What corn ear rots and mycotoxins should I watch out for? 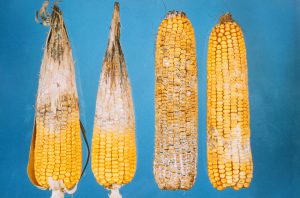 With all the wet weather, several ear rots have appeared in corn around much of the state. Ear rots caused by fungi in the groups Diplodia (Fig 2.), Fusarium, and Gibberella (Fig. 2) will be the most likely candidates to watch for as you begin harvest.  Fusarium and Giberrella are typically the most common fungi on corn ears in Wisconsin.  This group of fungi not only damage kernels on ears, but can also produce toxins called mycotoxins.  These toxins (fumonisins and vomitoxin) can threaten livestock that are fed contaminated grain. Thus grain buyers actively test for mycotoxins in corn grain to monitor mycotoxin levels to be sure they are not above certain action levels established by the U.S. Food and Drug Administration (FDA).

Diplodia ear rot is not as common in Wisconsin. This disease is often more severe in years where dry weather precedes silking, followed by wet weather immediately after silking. Diplodia ear rot does not produce mycotoxins. While this disease does not result in mycotoxin accumulation, it can cause grain yield loss and quality issues.

If substantial portions of fields appear to be contaminated with mold, it does not mean that mycotoxins are present and vice versa. Remember, Diplodia ear rot does not produce mycotoxins. However, if you are unsure, then appropriate grain samples should be collected and tested by a reputable lab.  Work with your corn agronomist or local UW Extension agent to ensure proper samples are collected and to identify a reputable lab. If tests show high levels of mycotoxins in grain, that grain SHOULD NOT BE BLENDED with non-contaminated corn.

If you observe mold in certain areas of the field during harvest, consider harvesting and storing that corn separately, as it can contaminate loads; the fungi causing the moldy appearance can grow on good corn during storage.  Harvest corn in a timely manner, as letting corn stand late into fall promotes Fusarium and Gibberella ear rots.  Avoid kernel damage during harvest, as cracks in kernels can promote fungal growth.  Also, dry corn properly as grain moisture plays a large role in whether corn ear rot fungi continue to grow and produce mycotoxins.  For short term storage over the winter, drying grain to 15% moisture and keeping grain cool (less than 55F) will slow fungal growth. For longer term storage and storage in warmer months, grain should be dried to 13% moisture or less. Fast, high-heat drying is preferred over low-heat drying. Some fungi can continue to grow during slow, low-heat drying. Also, keep storage facilities clean.  Finally, mycotoxins are extremely stable compounds: freezing, drying, heating, etc. do not degrade mycotoxins that have already accumulated in grain. While drying helps to stop fungal growth, any mycotoxins that have already accumulated prior to drying will remain in that grain. The addition of acids and reducing pH can reduce fungal growth but will not affect mycotoxins that have already accumulated in harvested grain.

For wet corn, earlage, snaplage or corn silage, promote optimal fermentation to preserve and stabilize the feed for dairy or beef cattle. As mentioned above, mycotoxin presence will not be alleviated, however stabilizing the crop can ensure the issue won’t worsen. Seal the crop as quickly as possible after harvest and use a research proven bacterial inoculant, acid or chemical preservative to stabilize the crop quickly after sealing. Monitor bag, bunker, and pile silo plastic for holes throughout the year and seal those you find quickly. Seal the ends and/or edges with added weight to minimize air infiltration into the silage or grain.

What impact will ear and stalk rot have on my cows?

Ear and stalk rots do not equate to animal health issues, however mycotoxins or wild yeast contamination which may be produced by or accompany ear and stalk rots can affect rumen health and digestion. As described above, manage the crop to the best of your ability from harvest through storage. Upon feed out, introduce heavily ear and stalk rot-laden feeds slowly into the ration. Test the suspicious crop for mold, yeast and vomitoxin content as you begin feeding it and closely monitor dry matter intakes and animal health.

If animal health issues or contaminant levels for yeast and mycotoxin are recognized, consult with your nutrition and veterinary advisor as to the best plan of attack. Dilute the suspicious feed to a lesser amount if possible or consider research backed nutritional additives which can lessen yeast or mycotoxin impact on health.

This article is an adaptation of the following resource: