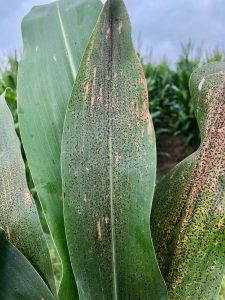 Figure 1. Tar Spot on Corn From the Arlington Agriculture Experiment station in 2018.

The phone has been ringing off the hook over the past week. In fact, this morning I had to dump my voicemail as it wouldn’t take any more messages. Why is that? For those of you who have been traveling the southern Wisconsin and Northern Illinois countryside, you know why. Holy tar spot, Batman!

Tar spot (Fig. 1) is no longer a cosmetic leaf disease in Wisconsin and Illinois. We have seen epic levels this season, resulting in severe damage in some fields and early dry-down of corn. Tar spot is a relatively new disease in the U.S. and Wisconsin. It is caused by a fungus called Phyllachora maydis. Tar spot causes small tar-like spots on the surface of corn leaves. For great information about tar spot and what it looks like, consult this Purdue Extension fact sheet. Tar spot was first found in the U.S. in 2015. In 2016 and 2017, tar spot was identified in Green, Iowa, Grant, and Lafayette counties in Wisconsin. In 2018 confirmations have been made in these same general areas, but also has expanded to include reports from as far north as Columbia Co. over to the eastern side of the state, including Fond Du lac and other areas of the cron belt. Severity has ranged from simple cosmetic damage to complete death of entire fields. Unfortunately, it is hard to discern why the epidemic is so significant here in the upper Midwest in 2018. Some anecdotal thoughts include hybrid susceptibility, environmental impacts, and synergistic reactions between multiple organisms.

In Latin America Phyllachora maydis can be found in a complex with another fungus called Monographella maydis. In areas where the complex occurs significant yield loss has been described. However, in the U.S. Monographella maydis has not been found in complex with Phyllachora maydis. In addition, a third organism, Coniothyrium phyllachorae, has also been found to be associated with the complex. This organisms has also not been implicated in the epidemics in the Midwest. So, our epidemic of 2018 is a real head-scratcher.

What is known about tar spot? 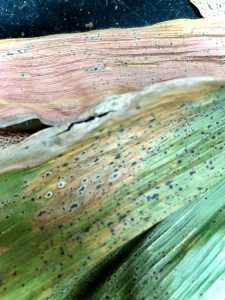 Figure 2. Tar spot with “Fisheyes” on the upper surface of corn leaves.

Tar spot is favored by cool conditions (60-70 F) and high relative humidity (averages above 75%). It is generally accepted that when Phyllachora maydis occurs by itself, damage is cosmetic in nature and does not result in significant yield reductions. This has been most of the case since 2016 when tar spot was first identified in Wisconsin. In Latin America where Phyllachora maydis can form complexes with Monographella maydis and/or Coniothyrium phyllachorae, “fisheye” symptoms along with severe necrosis and early dry down can be observed. In Latin America, it has been reported that when in complex, damage from tar spot can result in yield loss as much as 30%. The main method to manage tar spot in Latin America is to use resistant hybrids. Little is known about effective fungicides, especially fungicides that might be available in the U.S.

So is tar spot behaving the same in the Midwest U.S. as in Latin America?

The simple answer is, I don’t know. We can easily find the presence of Phyllachora maydis on affected corn in the Midwest. However, we aren’t able to easily find the other organisms that have been implicated. However, we do find “fisheyes” and significant necrosis on corn leaves (Figs. 2 and 3). It could be that Phyllachora maydis is forming a complex with other organisms in the Midwest. Things don’t have to be the same as in Latin America. One simple observation is that in areas where gray leaf spot (GLS) got an early foothold on corn, we have seen more severe epidemics of tar spot. Is that the complex in Wisconsin? Not sure, but definitely a lot of damage in some fields by both organisms. This is why we are working hard right now to identify organisms implicated in causing this damage. We need to know what the complex might be here in Wisconsin and the Midwest.

What is the impact on yield and do I need to worry about mycotoxins? 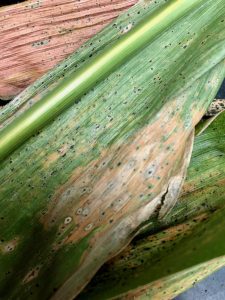 Figure 3. Tar spot with “Fisheyes” on the lower surface of a corn leaf.

We are not sure what the impact on yield will be yet. This is a hard question to answer and will depend on when the epidemic started in a field and how severe symptoms will be. If I had to make an educated guess, on grain corn, damage will likely range from none, to low test weights on moderately affected fields, to some yield loss in fields that were hit early. On silage corn, it might be difficult to pack the bunker as dry-down is occurring rapidly and moisture might be too low to make quality silage. Mycotoxins have not been implicated in the organisms reported to cause tar spot in Latin America. However, that doesn’t mean that other organisms that cause mycotoxins might not be present on harvested grain or silage. While we don’t expect there to be an issue with mycotoxins, I would encourage you to continue to test grain and feed to be sure mycotoxins are not present.

What should I do with fields affected by tar spot?

Scout these fields. It will be important to make timely harvest decisions. For fields that will be taken for grain, consider harvesting these fields early. One observation we have made is that in fields affected by early epidemics and dry-down, stalks have been scavenged for nutrients to finish filling the ear. This is leaving stalk integrity in some of these fields as highly questionable, with various stalk rots moving in. Timely harvest will be key in these fields before excessive lodging occurs. For silage, other considerations, such as high-moisture corn, might be needed where corn is too dry to effectively pack the bunker. Also, be sure to continue to test for mycotoxins just to be sure there aren’t other organisms capitalizing on already stressed corn plants. DO NOT apply fungicides at this point. Fungicides will not be effective after the milk growth stage and most fungicides have a pre-harvest interval that has already passed for both silage and grain.

What is the Wisconsin Field Crops Pathology program doing to understand tar spot?

While frustrating for those of you who have to deal with this disease, we do need to take our time to try to figure out what the cause of the epidemic is. If we don’t know what to control, how do we develop a management plan? You wouldn’t just take antibiotics, if you didn’t know what caused your sore throat, would you?

We are working with Dr. Nathan Kleczewski at the University of Illinois to improve our understanding of this pathogen in the U.S. If you would like to confirm tar spot on corn, or provide samples for research purposes, you can send samples to the University of Wisconsin Plant Disease Diagnostic Clinic. If we can get a better handle on what is causing the the significant damage on corn, we can make informed decisions about how to manage it. Our program is also rating and taking notes in fungicide trials where we have tar spot. We aren’t sure we will find differences, but taking notes on timing of application and products will inform our recommendations. We also are looking for hybrid trials where we could take notes on resistant hybrids. Finally, we have initiated a late-season field trial to begin to understand the epidemiology of this disease. If we can understand when it moves in and how long it takes to see symptoms after infection, we might be able to better apply in-season management strategies. In summary, we are working on trying to find some answers, but research and acquiring relevant data will take a little time.

What to Expect from Stalk Rot and Mycotoxins in Severely Diseased and Damaged...
Scroll to top