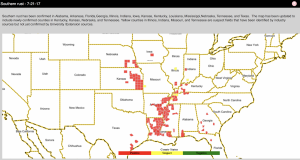 If you are like me, you have been paying attention to reports from the southern U.S. indicating that southern rust of corn is making its way further north again this year. You can follow current southern rust updates on the iPiPE site. The latest reports place southern rust in central portions of Iowa and Illinois (Fig. 1), which means farmers in Wisconsin need to start paying attention to this issue. Scouting over the next several weeks is going to be critical for making in-season management decisions for this disease. Yield reductions in Wisconsin will be greatest if southern rust moves in prior to the “milk” (R3) growth stage in corn. Lets take a closer look at southern rust and its less damaging relative, common rust. 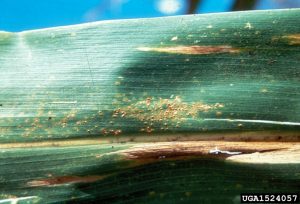 Southern rust is caused by the fungus Puccinia polysora. Symptoms of southern rust are different from common rust in that they are typically smaller in size and are often a brighter orange color (Fig. 2). Pustules of southern rust also typically only develop on the upper surface and will be be more densely clustered. Favorable conditions for southern rust development include high humidity and temperatures around 80F. However, very little free moisture is need for infection to occur. Southern rust is typically a rare occurrence in Wisconsin. When it does occur, it is usually in the southern and south-western portions of the state, with epidemics initiating late in the season. With that said, southern rust did make it to southern Wisconsin in 2016. However, the arrival was well past R3 and yield reductions caused by southern rust were insignificant in Wisconsin. Spores of this fungus have to be blown up from tropical regions or from symptomatic fields in the southern U.S. The fungus can not overwinter in Wisconsin. While southern rust epidemics can be rare events in Wisconsin, the disease can be serious when it occurs. Therefore close monitoring of forecasts and scouting are needed to make timely in-season management decisions.

Traditionally resistance was used to manage southern rust. However, in 2008 a resistance-breaking race of the southern rust fungus was confirmed in Georgia. Thus most modern hybrids are considered susceptible to southern rust. Rotation and residue management have no effect on the occurrence of southern rust. The southern rust fungus has to have living corn tissue in order to survive and can not overwinter in Wisconsin. Fungicides are typically used to control southern rust in parts of the U.S. where this is a consistent problem. Efficacy ratings are available for fungicides against southern rust on the Corn Fungicide Efficacy Table. As I said previously, should southern rust make its way to Wisconsin prior to the “milk” (R3) growth stage in corn, it could cause yield reductions. Growers and consultants should scout carefully through the R3 growth stage and be sure to properly identify the type of rust observed. If you need assistance in identifying rust on corn, leaf samples of corn plants can be sent in a sealed plastic bag with NO added moisture to the University of Wisconsin Plant Disease Diagnostic Clinic (PDDC). Information about the clinic and how to send samples can be found by CLICKING HERE. 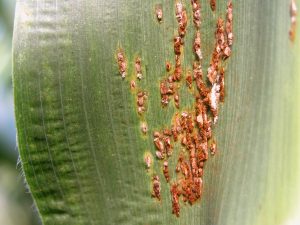 Figure 3. Brick-red Pustules of the common rust fungus on a corn leaf.

Common rust is caused by the fungus Puccinia sorghi and is extremely common in Wisconsin, but often results in little yield loss. Most field corn hybrids planted in Wisconsin are very resistant to the disease. Symptoms can include chlorotic flecks that eventually rise and break through the epidermis to produce pustules of brick-red spores (Fig. 3). Typically these pustules are sparsely clustered on the leaf. They can also appear on other parts of the plant including the husks and stalks. Management for common rust primarily focuses on using resistant hybrids. Remember resistance is not immunity, so some pustule development can be observed even on the most resistant hybrids. Some inbred corn lines and specialty corn can be highly susceptible to common rust. Under these circumstances a fungicide may be necessary to control common rust. Most of the hybrids I have scouted this season have some pustules, however incidence and severity is relatively low. Therefore, a fungicide application to control common rust isn’t needed for most of these hybrids in Wisconsin. Residue management or rotation is typically not needed for this disease as inoculum (spores) have to be blown up on weather systems from the southern U.S.