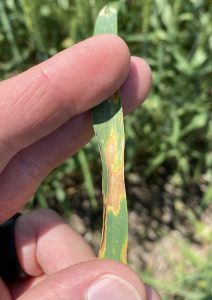 We are now well past the time to apply fungicide on winter wheat in Wisconsin. Anthesis has come and gone and now it is time to scout for the predominant diseases to start planning for harvest. We have not observed any symptoms of Fusarium head blight (FHB or scab) yet, but we will continue traveling and scouting.

We are beginning to observe increasing levels of foliar diseases on winter wheat in the state. Septoria leaf blotch (Fig. 1) is visible in the lower canopy and moving up the canopy in many fields we have been in, as weather remains wet and humid. Fungicide applications for FHB should slow the progress of Septoria leaf blotch up the canopy, but care should be taken to monitor the progress of this disease. 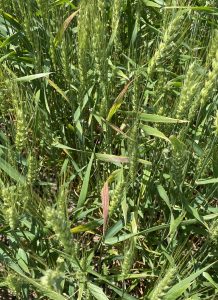 We are also finding higher than normal levels of Barley yellow dwarf virus (BYDV) in winter wheat (Fig. 2). Levels of BYDV are between 5 and 10% incidence on some varieties in the uniform variety trials. Higher levels may be a result of earlier than normal aphid flights this spring due to mild conditions. Regardless, I don’t think there is a huge amount of concern, as many varieties are resistant and levels observed are still below that at which yield might be reduced.

Finally, we have observed Cephalosporium stripe on wheat at the Arlington uniform variety trial location (Fig. 3). We have seen this disease occurring more frequently in the state over the last couple of seasons. One reason might be shorter rotations between wheat in some fields and potentially increased susceptibility in some varieties. I would say that this season it isn’t severe as far as we have seen, but we will rate the disease and report results if they look meaningful. You will remember that in 2019, we had a severe epidemic of Cephalosporium stripe at our Sharon, WI uniform variety trial location. The severity ratings can be found in the trial report. 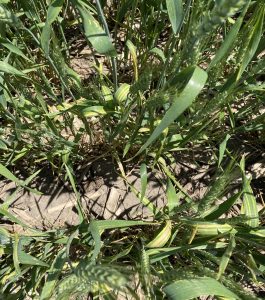 We continue to look for stripe rust in the state. While we have found it at VERY low levels in a couple of locations, we have not seen increased occurrence or severity since the initial observations. Hot and dry weather has kept this disease under control. We will continue to scout wheat in the state and report the results of our observations here. Until then, get out and SCOUT, SCOUT, SCOUT!