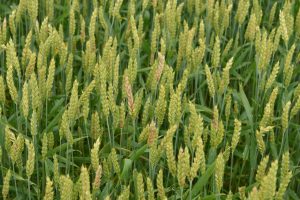 The Wisconsin Field Crops Pathology crew has scouted and rated all winter wheat variety trials across the wheat-growing region of the state. We have also looked at commercial fields for disease in the region. In general leaf diseases will be of minimal impact this season. We have observed a little Septoria leaf blotch in some fields in the lower canopy. However, this pathogen will not limit yield this season, as it has not reached the flag leaf yet. We have also not observed any stripe rust this season. As I mentioned in previous posts, the winter was cold enough with minimal snow cover, which didn’t allow the stripe rust pathogen to overwinter in the region. Subsequent spread from the southern states north, was also not fast enough to reach the crop in Wisconsin to impact yield. If stripe rust does arrive this season, it will not impact yield. Leaf rust was observed at the Arlington (south-central Wisconsin) location. However, it was at very low incidence and severity and will likely not impact yield on most varieties in the state. 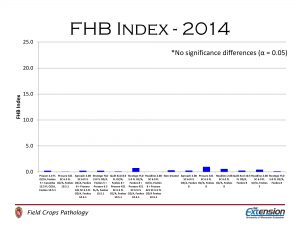 Fusarium head blight (FHB; scab) has been observed at all locations visited. Incidence and severity is highly variable based on location. At the Sharon (southern Wisconsin) and Arlington locations, FHB could be found in some plots at incidence levels as high as 50% with 50% severity. Many plots had low levels of FHB, thus the average levels at these locations was around 10% incidence with severity levels of around 20%. As we moved north and east in Wisconsin, FHB was at much lower incidence and severity levels. Incidence averaged 5%-10% with severity around 15% at the Chilton and Fond du Lac locations. Commercial fields that we have scouted in these regions fall within these same averages. 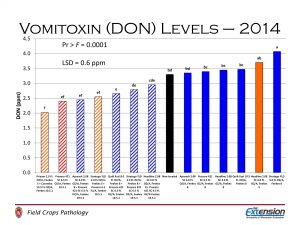 While I don’t think the FHB epidemic in 2018 will be as bad as 2015, I think it is important to scout fields and understand the levels of FHB present. It will also be important to test finished grain for vomitoxin or DON. Often, the level of visible FHB damage does not reflect the vomitoxin levels of harvested grain. This happened in some fields in 2014, including a research trial that we had at the Arlington location. FHB index levels on heads in the field were very low across all treatments in our research trials that year (Fig. 2). However, when the finished grain was tested for vomitoxin, levels were quite high (Fig. 3). There are a number of factors that can contribute to this phenomenon, including time of infection, varieties, weather, and treatment. The point is, be sure this doesn’t happen to you. Scout AND have finished grain tested so you aren’t surprised at the elevator!

It’s Time for Fireworks and Spores To Fly: Independence Week in Wisconsin...
Scroll to top