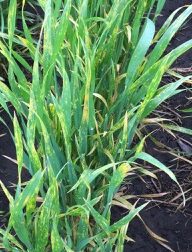 The Wisconsin Field Crops Pathology crew spent some time this past week scouting wheat and rating wheat variety trial plots, between planting soybeans and dodging rain storms. Despite the challenging week, the crew was able to get around to several sites and take a look at winter wheat. Wheat ranges from fully emerged flag leaf to emerging heads across the sites visited. As predicted, stripe rust is progressing to epidemic levels on susceptible and moderately susceptible varieties (Fig. 1). We were able to find many plots with stripe rust on the L2 leaf (leaf immediately below the flag leaf) with some varieties already showing 20% or more severity on flag leaves (Fig. 2). We were also able to find many varieties still showing no symptoms of stripe rust. We also have had several reports of disease-free winter wheat across the state. Further inquiry suggests that many did their homework last summer and fall, and chose varieties with excellent stripe rust resistance. This will more than pay for itself this season in fungicide spray savings. 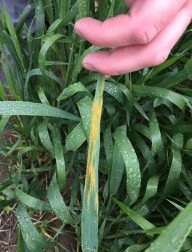 Figure 2. Stripe rust on a flag leaf of winter wheat.

We are quickly approaching head emergence and anthesis on many varieties in the state of Wisconsin. I predict that anthesis (flowering) will take place within the next week or so in Wisconsin. Farmers should focus on making a decision on fungicide application to control Fusarium head blight (FHB or scab). At this point, I think farmers should hold off on a fungicide application specifically for stripe rust. The major focus for fungicide application on winter wheat in Wisconsin should shift to managing FHB. With this said, the two primary products that have performed well in Wisconsin for FHB, also perform well on stripe rust and are ranked excellent in the Small Grains Fungicide Efficacy Table. This means that spraying for FHB will also control stripe rust, as long as the stripe rust epidemic has not advanced to high levels on the flag leaves. Currently, the Fusarium Head Blight Prediction Center is ranking much of the primary winter wheat growing area of Wisconsin at medium-to-high risk for FHB on susceptible varieties (Fig. 3). Plenty of rain and adequate temperatures are making conditions ripe for FHB in the major wheat production area of the state. 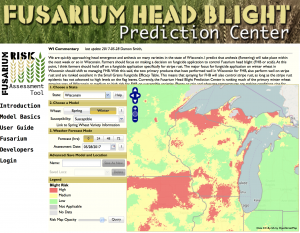 The next 7-10 days poses a critical time to make a decision for fungicide application to control FHB and stripe rust. The primary fungicides for control of FHB are Caramba and Prosaro. I would urge you to wait until anthesis has begun in your field before applying. We have observed poor control of FHB where application of these effective fungicides was made before anthesis. In fact, we have observed improved control of FHB and lower levels of DON in finished grain where fungicide application was delayed 4-5 days after the beginning of anthesis, compared to applications at the start of anthesis. Data from a fungicide efficacy trial to support this observation can be found by clicking here and scrolling down to pages 16 and 17. Also, remember that application of fungicides should be made no later than 6-7 days after the start of anthesis. After this time, fungicide efficacy on FHB is much reduced. Finally, DO NOT use any fungicide products that contain a strobilurin fungicide after the “boot” stage in wheat. Some studies have demonstrated that using strobilurin fungicides at, or after heading, can result in increased vomitoxin (DON) levels in finished grain. Get out there and SCOUT, SCOUT, SCOUT!