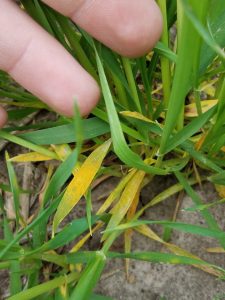 The Wisconsin Field Crops Pathology crew continues to scout wheat stands in various locations in Wisconsin. The primary disease of focus, remains stripe rust. Late last week we identified yet another stand of winter wheat with early stripe rust in a production field near Arlington, WI. The entire stand was planted to the variety Kaskaskia and had moderate levels of severity on the lower leaves (see picture). Incidence was spotty, but correlated to the greenest plants in the stand that were protected over the winter by snow cover. Other areas of the field that clearly were not insulated by snow and were further behind in growth stage, did not have visible symptoms of stripe rust. This observation reinforces the fact that stripe rust overwintered in this location during the winter of 2016/2017.

At this point in the season many growers have made their herbicide applications and either applied fungicide or held off. Growers and consultants should remain diligent in scouting for stripe rust and other diseases as the crop moves toward flag leaf emergence. As I look into my “crystal ball” I think that a decision to spray fungicide at the flag leaf growth stage is going to be critical in Wisconsin, especially on susceptible varieties. Weather has been very wet and temperatures are becoming more conducive for spread of the stripe rust pathogen. As these conditions persist, and we approach the flag leaf growth stage, a decision will need to be made to spray to control stripe rust. Remember that the flag leaf is responsible for much of the yield that a wheat plant will make. Our work in Wisconsin in 2016, demonstrated that for every 10% increase in stripe rust coverage on the  flag leaf alone, we lost almost 5.5 bu/acre in grain yield across the Wisconsin winter wheat variety trials. Thus, protecting this leaf is extremely important. On stripe rust-susceptible varieties, we have seen much benefit in flag applications to control stripe rust, especially when the pathogen is active.

Remember that there are many fungicide options for stripe rust control. Also, fungicide applications directed toward Fusarium head blight (FHB or scab) will also protect against stripe rust. So as you make your decision to spray at the flag leaf growth stage, choose a product that fits your pocketbook and consider that you might spray a strobilurin-containing product at this earlier growth stage. Later in the season, you will want to rotate to a non-strobilurin-containing product for your FHB control (Prosaro or Caramba). Hopefully we won’t have to make two applications of fungicide this year, but be prepared should the conditions necessitate this practice. Get out and scout, scout, scout!