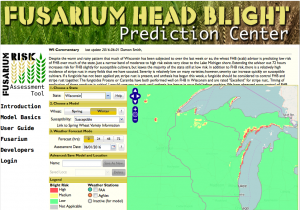 Despite the warm and rainy pattern that much of Wisconsin has been subjected to over the last week or so, the wheat FHB (scab) advisor  is predicting low risk of FHB over much of the state (Fig. 1). Just a narrow band of moderate to high risk exists very close to the Lake Michigan shore. Extending the advisor out 72 hours increases risk for FHB slightly for susceptible cultivars, but leaves the majority of the state still at low risk.

In addition to FHB risk, there is a relatively high incidence of stripe rust in many fields that we have scouted. The Wisconsin Field Crops Pathology Crew scouted Winter Wheat Variety trials and commercial fields near Chilton and Fond du Lac on May 27th. At both locations, wheat ranged from boot stage to heading. Anthesis will occur sometime this week or is occurring as we speak in many of the varieties.

The primary disease at the Fond du Lac location was stripe rust. Incidence (less than 10% across varieties) and severity (less than 5% on F1 or F2 leaves) was generally low in most varieties. One variety in the small plot variety trial had stripe rust present on very old tillers. In fact, stripe rust had been active for a while as telia (pathogen structure) were forming. I suspect that stripe rust may have over-wintered on this variety at Fond du Lac considering our mild winter.

At the Chilton location, stripe rust incidence was much higher (25-30%) however, severity was generally low (less than 5% on F1 leaves). However, there were several hot spots of stripe rust present in the variety trial and also commercial wheat surrounding the trial. Growers will need to watch this situation carefully. I fear that stripe rust will be increasing dramatically this week with our rainy and humid weather.

If a fungicide has not been applied yet, stripe rust is present, and anthesis has begun this week, a fungicide should be considered to control FHB and stripe rust together. The fungicides Prosaro or Caramba have both performed well on FHB in Wisconsin and are rated “Excellent” for stripe rust. Timing of application of these products is critical. I would urge you to wait until anthesis has begun in your field before applying. We have observed poor control of FHB where application of these effective fungicides was made before anthesis. In fact, we have observed improved control of FHB and lower levels of DON in finished grain where fungicide application was delayed 4-5 days after the beginning of anthesis, compared to applications at the start of anthesis. Also, remember that application of fungicides should be made no later than 6-7 days after the start of anthesis. After this time, fungicide efficacy on FHB is much reduced.