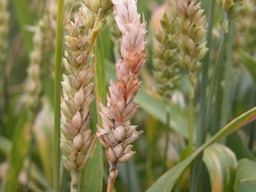 The 2015 growing season has been fairly challenging for managing winter wheat diseases. Many fields we have observed have some level of disease. Fusarium head blight (FHB or scab) is the primary disease observed in all locations from the southern portion of the state on up through Fond du Lac. In locations near Janesville, some varieties of winter wheat not sprayed with a fungicide have FHB incidence and severity levels close to 50%. Significant yield loss and quality issues, including high levels of deoxynivalenol (also known as DON or vomitoxin) will be a problem as farmers being to harvest grain in a couple of weeks. Fields should be assessed now for damage by FHB to understand how much DON might be expected in grain at harvest.

Other Wheat Diseases in Wisconsin

Rust has also been an issue on winter wheat this season. Both stripe and leaf rust were observed at high levels near Arlington Wisconsin recently. Near Janesville, rust was observed to be more intermittent in occurrence. Stripe rust was present, however, incidence and severity of leaf rust was a bit higher on some varieties. Stagnospora/Septoria leaf blotch can be found in most locations. However, the disease has been present mostly in the lower canopy and has not made its way to the flag leaf. Powdery mildew has been nearly non-existent for the third year in a row in the state.

Clover Root Curculio on Alfalfa in Wisconsin
Scroll to top