You are here: Home / Fusarium Head Blight (Scab) of Wheat

What is Fusarium head blight? Fusarium head blight (FHB) or scab is a fungal disease that affects wheat, barley, oats, corn, and many grasses.  FHB is important, not only because it reduces yield, but also because it reduces the quality and feeding value of grain.  In addition, the FHB fungus may produce mycotoxins, including deoxynivalenol (also known as DON or vomitoxin), that when ingested, can adversely affect livestock and human health.  The U.S. Food and Drug Administration has set maximum allowable levels of DON in feed for various animal systems, these are as follows: beef and feedlot cattle and poultry < 10ppm; Swine and all other animals < 5ppm. 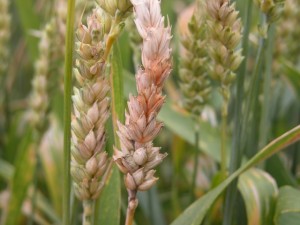 What does Fusarium head blight look like? Diseased spikelets on an infected grain head die and bleach prematurely.  Healthy spikelets on the same head retain their normal green color.  Over time, premature bleaching of spikelets may progress throughout the entire grain head.  If infections occur on the stem immediately below the head, the entire head may die.  As symptoms progress, developing grains are colonized causing them to shrink and wrinkle.  Often, infected kernels have a rough, sunken appearance, and range in color from pink or soft gray, to light brown.

Where does Fusarium head blight come from? FHB is caused by the fungus Gibberella zeae (also known as Fusarium graminearum).  In addition to wheat, the fungus is a pathogen of corn, barley, and other grasses. This fungus overwinters on infested stubble and straw of cereals and weed grasses, and on stalks and rotted ears of corn.  The severity of FHB varies greatly from year to year.  Infection is favored by extended periods of high moisture or high (>90%) relative humidity, and moderately warm temperatures (59 to 86°F).  These conditions have to occur just before or during wheat flowering (Feekes 10.5) and wheat can remain susceptible to infection through the early dough stage (Feekes 11.2). If favorable weather conditions persist, flowering tillers can continue to be infected.  This is especially problematic in wheat stands that are at varying levels of maturity. 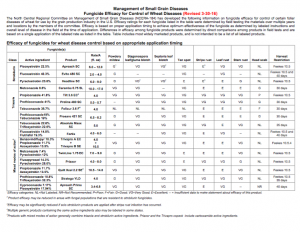 How can I save a wheat crop with Fusarium head blight?  Fungicides are available for control of Fusarium head blight.  Triazole fungicides (Fungicide Resistance Action Committee; FRAC class 3) are recommended for control of FHB.  Fungicides containing prothioconazole, tebuconazole, a pre-mix of these two compounds, or metconazole have given the best control of FHB in University research trials.  Strobilurin fungicides (FRAC class 11) should be avoided for controlling FHB.  Research has demonstrated that the use of strobilurin fungicides to control FHB can result in an increase in DON levels in harvested grain.  For a complete list of fungicides tested in University trials CLICK HERE or on the image below.

A web-based FHB risk assessment tool is available at http://www.wheatscab.psu.edu.  This tool can be used by crop management personnel when making decisions about applying a fungicide just before or at flowering.  The tool also provides real-time, local commentary by extension personnel about the status of diseases in wheat.  There is also a mobile version of the FHB risk assessment tool that runs on all mobile device platforms.  The mobile version has the capability of utilizing the GPS on a smartphone and determining your location to deliver a site-specific prediction.  To access the mobile version go to http://m.wheatscab.psu.edu.

How can I avoid problems with Fusarium head blight in the future?  DO NOT plant small grains into small grain or corn residue as this increases the chance of FHB.  Also, avoid planting grain crops near areas where there are large amounts of small grain or corn residue on the soil surface.  When possible, plant small grains following a legume crop (e.g., soybeans) and maintain a rotation with two to three years between small grain crops.  In addition, deep plowing of all infested plant debris is recommended.  DO NOT apply manure containing infested straw or corn stalks onto fields planted to small grains.  Certain grain varieties have moderate levels of partial resistance to FHB, and use of these varieties can lead to a reduction in disease severity and an increase in grain quality.  Finally, plant several varieties of a small grain that vary in flowering date.  This will decrease the risk that an entire crop will be vulnerable to FHB when weather conditions favor the disease.

To download a full PDF of this article HERE.

Information on FHB from Dr. Carl Bradley at the University of Illinois