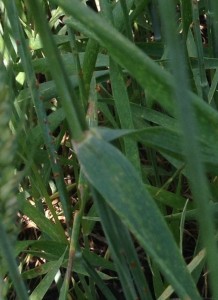 My graduate students and I scouted and rated Shawn Conley’s State Uniform Winter Wheat Variety Trial at the Arlington Agricultural research station located in Columbus, County Wisconsin yesterday (June 26).  We were able to find leaf rust in many plots with incidence of this rust at 100% in many plots, but severity at no more than 10% on flag leaves.  Rust samples have been sent from this location to the Cereal Disease Lab in Minnesota for race typing.

My students were also able to find several very small foci of stripe rust.  Just 2 flag leaves found in 2 separate plots with just 10 or so pustules on each flag leaf.  So both incidence and severity is extremely low for stripe rust at this location.  This is very different than the past 2 seasons where we have had extremely high incidence and severity of stripe rust by this point in the season.  I suspect stripe rust will be of low impact for us this season in Wisconsin.
My students were also able to find a single plot with about 5 plants with stem rust.  I have attached a picture (not great quality) showing the characteristic pustules cracking through the epidermis of the wheat stem.   This was the only plot where we observed stem rust.  We will continue to monitor the rust situation in Wisconsin.  However, the severity of rust is very low for this point in the season.  The impact on yield from rust will likely be low as plants are quickly approaching the dough stage and rust severity remains generally low across most varieties.
https://badgercropdoc.com/wp-content/uploads/sites/5/Stem-Rust-1-218x300.jpg 0 0 damonsmith https://badgercropdoc.com/wp-content/uploads/sites/5/2018/05/bcd-color-300x153.png damonsmith2014-06-27 08:57:482014-06-27 08:57:48Wisconsin Winter Wheat Disease Update-June 27

Evaluation of fungicides for control of foliar diseases of Alfalfa at cutting...