Blog - Latest News
You are here: Home / Alfalfa / Evaluation of fungicides for control of foliar diseases of Alfalfa at cutting... 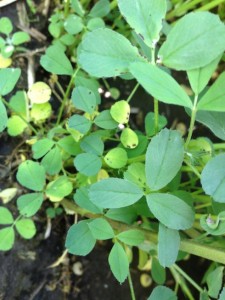 An evaluation of foliar applied fungicides for control of diseases of alfalfa was implemented in Wisconsin in 2014.  This work is a continuation of fungicide evaluation that has been ongoing since 2011.  In previous trials, yield advantage by using fungicide was only observed about 20% of the time when fungicide was used. In addition, the yield advantage is often not high enough to cover the cost of the fungicide application.  In 2014 we wanted to continue to evaluate some newer products on the market and determine if there was a yield increase and added value when used.  Methods and results from the first cutting in 2014 are below.

The trial was established at the Arlington Agricultural Research Station located in Arlington, WI. The alfalfa cultivar ‘Spring Gold’ was seeded on 20 Aug 2012 in a field with a Ringwood silt loam soil (6 to 12% slopes). The experimental design was a randomized complete block with four replicates.  Plots were 40 ft long and 10 ft wide.  Standard alfalfa production practices as described by the University of Wisconsin Cooperative Extension Service were followed. Treatments consisted of a non-treated control and five fungicide treatments. Fungicides were applied using a CO2-pressurized backpack sprayer equipped with 8001 TurboJet flat fan nozzles calibrated to deliver 20 GPA.  Fungicides were applied once plants had reached a height of 6 in. Date of fungicide application was 4 May 2014. Natural sources of pathogen inoculum were relied upon for disease. Disease and defoliation was evaluated immediately after harvest by visually estimating both parameters with the aid of standard area diagrams. A small-plot harvester was used to cut a 31-in wide by 37.4 ft long area of each plot to determine wet yield. A subsample of alfalfa was also collected from each replicate (~0.50 lb.), weighed, then dried and weighed again to determine dry matter yield. Value added per acre was also determined for each treatment using the following method. First yield differences compared to the control were calculated (yield advantage). Price advantage per acre was then determined by multiplying the yield advantage by $0.10/lbs dry matter (price based on June 13, 2014 hay report). Finally, $30 (average price for a fungicide application) was subtracted from all price advantages to determine the value added to each acre by using fungicide. All disease, defoliation, yield, and added value data were analyzed using a mixed model analysis of variance (P=0.05).

Weather was very wet and cool prior to the first harvest. Based on these weather patterns the primary disease present at the first harvest was spring black stem. No significant differences in average severity of spring black stem were identified among all treatments (Table below). No significant differences in defoliation were identified among treatments. Dry matter yield was significantly higher than the non-treated check for all plots that received fungicide. Added value was not significantly different from the non-treated control for all plots that received fungicide. While there was an average yield increase when fungicide was used for this cutting, significant added value over the non-treated control was not observed when fungicide was applied. Phytotoxicity was not observed with any treatment.

**Note: Aproach is not yet labeled for use on alfalfa.  A label is anticipated in Wisconsin on alfalfa in the near future.

zValues are based on the average disease severity or defoliation prior to harvest on 3 Jun.

yMeans followed by the same letter are not significantly different based on Fisher’s Least Significant Difference (LSD; α=0.05).

xYield based on harvest on 3 Jun.

vValues determined after accounting for hay yield compared to the non-treated control and subtracting average price of fungicide application ($30/a); prices based on $0.10/ lbs. dry matter; June 13, 2014 Hay Report