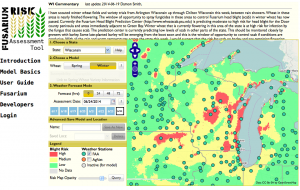 I have spent the last several days rating winter wheat variety trials and fungicide trials at the Arlington Agricultural Research Station in Arlington, Wisconsin, Columbia Co.  Wheat in this area is mostly in the mid-to-late milk stage.

Leaf rust was observed at low levels in border rows and plots not sprayed with fungicide.  Incidence (number of plants with symptoms) in some plots is near 50%.  However, severity (area of leaf covered by rust pustules) on flag leaves is low at 5% or less.  At this stage impact on yield by leaf rust will likely be low and fungicide sprays to control the disease at this stage are NOT recommended.

Septoria/Stagopsora leaf blotch was also observed on lower leaves of most plots.  Very few plots had leaf blotch symptoms on the flag leaves, and if they did, severity was in the 5% range. Impact on yield by leaf blotch at this location will be low.  Again, fungicides are NOT recommended on winter wheat at this growth stage.

Very little Fusarium head blight (scab) has been observed on winter wheat from Arlington, Wisconsin on up through to Chilton, Wisconsin. Currently the Fusarium Head Blight Prediction Center (http://www.wheatscab.psu.edu) is predicting moderate to high risk for head blight for much of the state of Wisconsin (Fig. 1).  Winter wheat in much of the state is likely past flowering now, and thus the window of opportunity to treat for head blight has passed. However, some late-planted barley may be emerging from the boot at this time and this is the window of opportunity to control scab on barley, especially with the risk being moderate to high.

If a fungicide is warranted for control of scab on barley, products such Prosaro, Caramba, or similar that contain triazole active ingredients can offer suppression of scab and reduce deoxynivalenol (DON) accumulation in harvested grain.  These products should be applied within a week from the beginning of flowering for reasonable control.  Products containing strobilurin fungicides should be avoided after heading.  Research has demonstrated that levels of DON can be higher after treatment with strobilurin products after heading.

Evaluation of fungicides for control of foliar diseases of Alfalfa at cutting...
Scroll to top