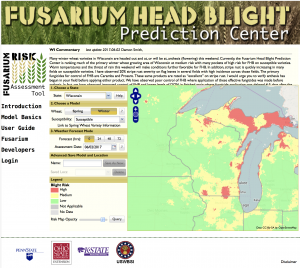 Many winter wheat varieties in Wisconsin are headed out and at, or will be at, anthesis (flowering) this weekend. Currently, the Fusarium Head Blight Prediction Center is ranking much of the primary winter wheat growing area of Wisconsin at medium risk with many pockets of high risk for FHB on susceptible varieties (Fig. 1). Warm temperatures and the threat of rain this weekend will make conditions further favorable for FHB. In addition, stripe rust is quickly increasing in many fields on susceptible varieties. I have observed 20% stripe rust severity on flag leaves in several fields with high incidence across those fields.

The primary fungicides for control of FHB are Caramba and Prosaro. These same products are rated as “excellent” on stripe rust. I would urge you to verify anthesis has begun in your field before applying either product. We have observed poor control of FHB where application of these effective fungicides was made before anthesis. In fact, we have observed improved control of FHB and lower levels of DON in finished grain where fungicide application was delayed 4-5 days after the beginning of anthesis, compared to applications at the start of anthesis. Also, remember that application of fungicides should be made no later than 6-7 days after the start of anthesis. After this time, fungicide efficacy on FHB is much reduced. Finally, DO NOT use any fungicide products that contain a strobilurin fungicide after the “boot” stage in wheat. Some studies have demonstrated that using strobilurin fungicides at, or after heading, can result in increased vomitoxin (DON) levels in finished grain. Get out there and SCOUT, SCOUT, SCOUT!