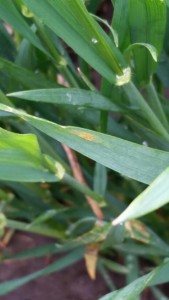 It was only a matter of time….

Today we confirmed the first observations of stripe rust in Wisconsin for 2016. Brian Mueller, Graduate Research Assistant  in the Field Crops Pathology Lab at the University of Wisconsin-Madison found active stripe rust pustules in winter wheat in both southern and south central Wisconsin. In southern Wisconsin stripe rust was found in the Wisconsin Winter Wheat variety trial located in Sharon, Wisconsin. Stripe rust was at low incidence and severity on emerging flag leaves with some lesions manifesting as chlorotic flecks and not yet active. We speculate that the epidemic initiated recently. With the humid and rainy weather over the past several days, conditions have been ripe for symptom development.

The second stripe rust confirmation was at the Arlington Agricultural Research Station in an integrated management trial for stripe rust. Again, incidence and severity were low on emerging leaves, therefore, we speculate that the epidemic has recently initiated. We have been actively looking for stripe rust as there have been numerous reports of epidemics in winter wheat in states to our south and west. Given the recent weather patterns we will likely see more stripe rust show up in the state.

Stripe rust in a “striped pattern” on winter wheat leaves.

Stripe rust or yellow rust of wheat is caused by the fungus Puccinia striiformis. Stripe rust can be identified readily by the bright yellow pustules that typically occur in a striped pattern on the surface of the wheat leaf. The color of the bright yellow stripe rust pustules is very different from the brick-red pustules that are common with leaf rust or stem rust. For more information on the biology of the stripe rust pathogen, and signs and symptoms, PLEASE VISIT THIS PREVIOUS POST.

Fungicide applications can also be useful for controlling stripe rust when properly timed with the onset of the epidemic. Frequent scouting of fields will help you to determine when stripe rust shows up and if an application of fungicide is needed to control it. Wheat will be most susceptible to yield loss if stripe rust infects plants prior to heading. In our fields in Arlington and Sharon, this disease will be a yield limiter, especially on susceptible cultivars due to the fact that it is already becoming active on emerging flag leaves. The later that stripe rust infects, the less the impact on grain yield will be. Scouting at or near the flag-leaf emergence growth stage (Feekes 8) can help with making the decision to apply a fungicide at this critical time period.  For information on fungicides effective for controlling stripe rust, consult the recently updated Small Grains Fungicide Efficacy Table found here.

Get out there and scout!  We are approaching a critical time to make a fungicide application decision in Wisconsin.