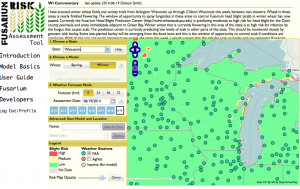 Currently the Fusarium Head Blight Prediction Center (http://www.wheatscab.psu.edu) is predicting moderate to high risk for head blight for the Door county peninsula and areas immediately adjacent to Green Bay (Fig. 1).  Winter wheat that is currently flowering in this area of the state is at high risk for infection by the fungus that causes scab. The prediction center is currently predicting low levels of scab in other parts of the state. This should be monitored closely by growers with barley. Some late-planted barley will be emerging from the boot soon and this is the window of opportunity to control scab if conditions are conducive.  With all the rain and warm temperatures across the state this week, I would suspect that the risk for scab on barley and any remaining flowering winter wheat will be elevated this weekend across much of the state.

If a fungicide is warranted for control of scab on winter wheat in the Door County area or barley, products such Prosaro, Caramba, or similar that contain triazole active ingredients can offer suppression of scab and reduce deoxynivalenol (DON) accumulation in harvested grain.  These products should be applied within a week from the beginning of flowering for reasonable control.  Products containing strobilurin fungicides should be avoided on wheat that has headed.  Research has demonstrated that levels of DON can be higher after treatment with strobilurin products after heading.

While scouting winter wheat fields at University of Wisconsin variety trials in the southern and eastern part of Wisconsin this week, I observed no rust or powdery mildew.  Trace levels of barley yellow dwarf were noted at all locations. At the Fond du Lac variety trial, high levels of Cephalosporium stripe (Fig. 2) were noted on certain varieties.  This location has seen short rotations between wheat crops, likely contributing to this epidemic.  We also noted high incidence (90%) of bacterial leaf blight on several varieties at this location. Some bacterial leaf streak was also observed, but incidence was less than 10%. Very low levels of Stagnospora/Septoria leaf blotch were noted. Most varieties had just completed flowering at this location and no scab was observed as of yet.

At the Chilton Variety trial, diseases are nearly absent.  The only disease noted on several varieties was bacterial mosaic at low incidence (<5%).  Cereal leaf beetle damage was moderate across many varieties in this trial.  Larvae were also found on flag leaves, but levels were below the economic threshold as of Tuesday.  Again at this location, most varieties had just completed flowering and no scab was observed as of yet.