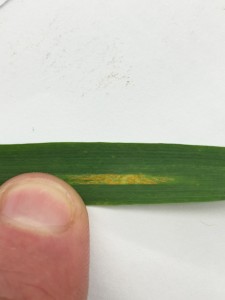 Brian Mueller, graduate student in my program, observed the first pustules of stripe rust on winter wheat in Wisconsin in 2015 (see attached image). These were found in Sharon, WI in the UW wheat variety trial on June 4. This location is west of Janesville, near the Illinois border. Pustules were located in just one plot on a single variety. No pustules were identified in other plots. We will continue to monitor the wheat rust situation over the next couple of weeks. 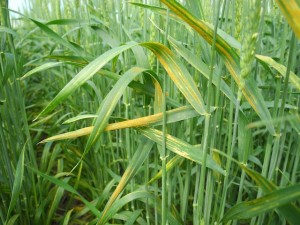 I recently visited some wheat plots in southern Wisconsin. As in previous weeks, wheat is looking good and tillering well and nearing the jointing stage. Few disease issues have yet to be identified. In states to our south and west, such as Kansas and Nebraska, this has not been the case. Stripe rust has been identified in some of these areas and has been classified as moderate to severe depending on the variety of wheat. While, not yet a concern on wheat in Wisconsin, wheat farmers and crop consultants need to be paying attention to this potential threat. Typically in years where stripe rust is an issue in the southern wheat belt, Wisconsin will also see the disease.

Stripe rust or yellow rust (Fig. 1) of wheat is caused by the fungus Puccinia striiformis. This 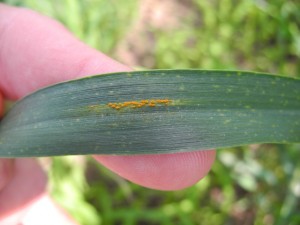 fungus is in the same group of organisms that cause other rust diseases of wheat such as leaf rust and also the famed stem rust, which put the importance of wheat breeding on the map. Stripe rust can be identified readily by the bright yellow pustules that typically occur in a striped pattern on the surface of the wheat leaf (Fig. 2). The color of the bright yellow stripe rust pustules is very different from the brick-red pustules that are common with leaf rust (Fig. 3) or stem rust.

The stripe rust pathogen survives on wheat debris as spores or mycelium (fungal threads) in areas where the temperatures don’t get above 90 F or below 20 F. It is thought that stripe rust cannot overwinter in the far northern areas of the U.S. such as Wisconsin. Little is know if the stripe rust fungus can survive the summers in Wisconsin, once the wheat crop has been harvested. We have a graduate student who will be working to address this and other questions about stripe rust on winter wheat in Wisconsin. 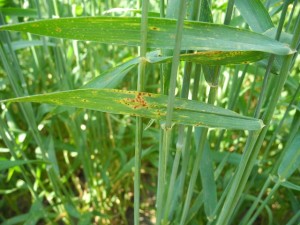 Fungicide applications can also be useful for controlling stripe rust when properly timed with the onset of the epidemic. Frequent scouting of fields will help you to determine when stripe rust shows up and if an application of fungicide is needed to control it. Wheat will be most susceptible to yield loss if stripe rust infects plants prior to heading. The later that stripe rust infects, the less the impact on grain yield will be. Scouting at or near the flag-leaf emergence growth stage (Feekes 8) can help with making the decision to apply a fungicide at this critical time period. Although, scouting wheat now can’t hurt either. Continued scouting through heading and anthesis (flowering; Feekes 10.5.1) can also help with making a decision to apply fungicide for leaf diseases and head diseases. For information on fungicides effective for controlling stripe rust, consult the Small Grains Fungicide Efficacy Table found here.