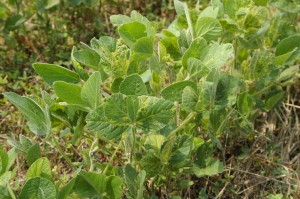 Calls, photos, and plant samples have been coming in over the last week (8/1/2014) pertaining to soybeans exhibiting abnormal growth and varying degrees of leaf mosaic (interwoven green and yellow areas).  These symptoms are indicative of Alfalfa mosaic virus (AMV) on soybean.

Alfalfa mosaic virus is transmitted in low levels in soybean seed (Tolin, 1999).  Aphids transmit AMV.  Symptoms of AMV can vary from localized dead lesions on leaflets (Fig. 1), to large areas of yellowing (Fig. 2).  Plants can also be stunted and produce few pods. In Wisconsin, research has shown that yield reductions can can occur as a result of AMV. However, in those studies, only AMV incidence levels of 30% or greater resulted in yield loss (Mueller and Grau, 2007). 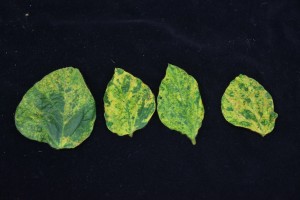 When trying to scout or diagnose a field with AMV consider the incidence (number of plants exhibiting symptoms) level of the symptomatic plants. Giesler and Ziems (2006) conducted a survey of AMV, BPMV, and SMV in Nebraska in 2001 and 2002.  In that survey it was possible to find an occasional field with incidence of these viruses as high as 90-100%.  However, the majority of fields that tested positive for one or more of these viruses, had incidence levels of 50% or less.  High incidence levels (>50%) are considered unusual for AMV in commercial soybean fields.  Therefore, incidence of leaf cupping or other abnormal leaf growth at incidence levels of 90% or 100% are more likely suggestive of an abiotic disorder, such as herbicide injury.

Co-infection of soybean by AMV and Soybean mosaic virus (SMV) can also occur (Malapi-Nelson et la., 2009). Co-infection can make symptoms of AMV much more severe. In cases where severely infected plants are identified with AMV, tests of SMV may also result in confirmation of that aphid-transmitted virus too.

How is the AMV Spread?

AMV is transmitted by mechanical wounding and also by aphids (several species, not just soybean aphid). AMV can also be transmitted at low levels in soybean seed.

No in-season management is recommended. Spraying insecticides to control aphids in order to reduce virus transmission has shown to be unsuccessful. One reason for this is that many species of aphids can move into a soybean field and transmit the virus. The best solution for managing AMV (and also SMV) is to choose a soybean variety with the best resistance to AMV and SMV you can find in your area. Remember, spraying aphids below threshold with an insecticide will only control the vector and won’t solve your virus problem.

To learn more about AMV and SMV click here.