Over the last several weeks, soybean samples have been coming into the Plant Disease Diagnostic Lab with symptoms of Cercospora leaf blight (CLB).  I have also received numerous questions about the disease and have observed CLB in several soybean fields around the state. 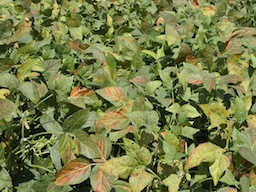 What does Cercospora leaf blight look like? Symptoms of CLB often appear during the reproductive phase of soybeans, but can appear earlier if conditions are conducive. Typically the upper leaves of the plant that are exposed to the highest levels of sunlight will show symptoms. These symptoms include a bronze (Fig. 1) to purple (Fig. 2) blotchy appearance on the leaves. Subsequent angular lesions can manifest on the upper and lower leaf surfaces. Lesions can grow together causing leaf death and defoliation under severe cases. The fungus that causes this damage is Cercospora kikuchii, which is the same fungus that causes purple seed stain of soybean (Fig. 3). Heavily infected seed can cause seedling blight and reduce stands. Less severely infected seed can survive but may be stunted or show reduced vigor. Typically in Wisconsin, damage by CLB is often not severe. Leaf discoloration is the typical symptom and defoliation is usually limited. However, frequent scouting during the early reproductive phase of soybean can help with monitoring the severity of CLB during seed set. 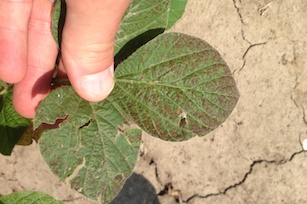 How does Cercospora leaf blight spread? Primary inoculum can come from infected seeds or from old soybean debris on the soil surface.  Infections are favored by humid conditions that result in heavy dew events. Warmer air temperatures (at or above 82 F) favor conidial formation and dispersal, which can result in secondary infection. Incidence of the seed stain phase of disease has been correlated with higher levels of spore dispersal during the season.

How should Cercospora leaf blight be managed? Soybean cultivars vary in their resistance to CLB. In fields were CLB has been a problem, cultivars with resistance should be chosen. Residue management is also important. Fields with short rotations and/or reduced tillage can have higher levels of CLB. Good quality seed should also be planted.  Seed lots with high levels of purple seed stain should be avoided. Some recent data suggests that the severity of CLB might be reduced by the use of a foliar fungicide in fields with high 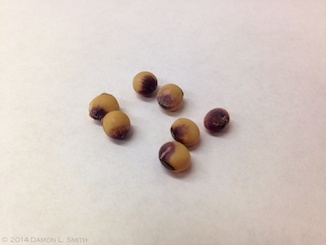 incidence of disease. For information on efficacy of products for CLB click here. Note that many products are labeled as just “fair” and no product was rated “good” for CLB. Therefore, a CLB management plan SHOULD NOT focus solely on foliar fungicide use, but should use an integrated management approach. In addition, severity from CLB in Wisconsin will often not be high enough to justify fungicide treatment. Scout carefully!