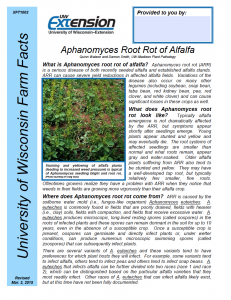 New Fact Sheet Describing Symptoms of Aphanomyces root rot and how to manage it.

A new UW Extension disease fact sheet on Aphanomyces root rot has recently been developed and ready for download.  The fact sheet describes symptoms of Aphanomyces root rot, gives details about the pathogen that causes the disease, and gives some management ideas. You can download the fact sheet by visiting the ‘Fact Sheet’ section of the UW-Madison Field Crops Pathology website or CLICK HERE. 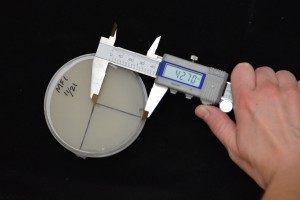 Many alfalfa farmers in the state of Wisconsin often find themselves struggling with root rot diseases of alfalfa. One of the increasingly more prevalent pathogens that cause root rot is the fungal-like organism Aphanomyces euteiches. To learn more about Aphanomyces root rot (ARR), you can click here to download an informational disease profile.

One of the main methods to manage ARR is through the use of host resistance. One of the complicating factors with ARR management, however, is that there are three races of the pathogen. Alfalfa varieties can differ in their performance to each race, with some varieties having only race 1 resistance or sometimes race 2 resistance. Resistance to race 3 seems less common, but does exist in a few cultivars.

Because of this complication of races and resistance interactions in alfalfa varieties, it would be nice to have some other management strategies that might be useful across races. One approach is to use fungicide seed treatments. Lately, seed treatments have gained popularity in the agronomic crops. Much interest has been paid in corn and soybean production. To learn more about the types of seed treatments available in agronomic crops, click here.  Now seed treatments are becoming more common in alfalfa. Probably the most common fungicide seed treatment on alfalfa is Apron XL®. This product contains the active ingredient mefenoxam, which is active against the ‘water-mold’ organisms in the groups Phytophthora and Pythium. Interestingly, A. eutieches is also a ‘water-mold’ but Apron XL® has been shown to not be active against this organism. Because of this shortfall, the industry has sought seed treatments that might be effective against A. eutieches.

Interest has grown in the seed treatment Stamina® for control of ARR in alfalfa. Stamina® fungicide seed treatment contains the active ingredient, pyraclostrobin.  This is the same ingredient that is in the popular foliar fungicide, Headline®. This is a FRAC group 11 compound, or what we commonly call a strobilurin fungicide. To dust up on your fungicide knowledge, you can visit an informational page, by clicking here.

I have received a lot of questions on the topic of using Stamina® on alfalfa. In order to answer questions about the efficacy and performance of this product against A. eutieches, we completed several experiments over the winter to compile some non-bias datasets. 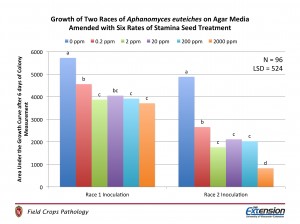 Two experiments were conducted. The first experiment involved simply growing a race 1 and race 2 isolate of A. eutieches on agar media amended with different concentrations of Stamina® (0 ppm – 2000 ppm). We measured the growth of the resulting colonies for 6 days. We then converted the daily growth data into a single number by doing an area-under-the-growth-curve transformation. This is a conversion that plant pathologists often use for data taken over multiple days. Figure 1 shows the results of the growth studies at each concentration for race 1 and race 2 isolates of A. eutieches. The race 2 isolate used in this study was a bit more sensitive to Stamina® than the race 1 isolate (shorter bars as the concentration increased for the race 2 isolate, compared to the race 1 isolate). However, growth was inhibited to a certain degree at higher concentrations of Stamina® for both races. These data suggest that Stamina® seed treatment has efficacy toward A. eutieches, but the level of efficacy might be dictated by the race of the isolate.

In another study we used our routine alfalfa bioassay to test the performance of Stamina® on treated alfalfa seed. We chose to use ‘Vernal’ as an Aphanomyces-susceptible cultivar of alfalfa and ‘WAPH 5’ as an Aphanomyces-resistant cultivar. Seed of each cultivar were treated with the high rate (3.1 fl ozs/100 lbs. of seed) of Stamina®. Seed were placed in the bioassay using the mycelial fragment inoculation method. Details about how the bioassay is conducted can be found here. Each treated variety was inoculated using isolates of all 3 known races of A. eutieches. We also included a set of plants that were not treated with Stamina®. This trial was conducted twice in a growth chamber. 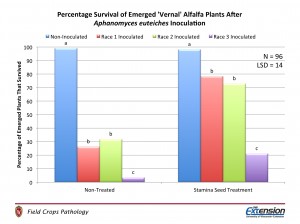 These data are preliminary, but it appears that Stamina® fungicide seed treatment might have efficacy toward ARR in alfalfa. However, based on the bioassay results in this trial, the positive effect of that 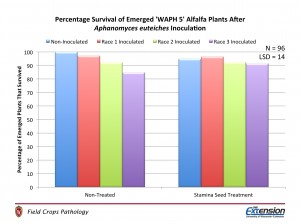 Stamina® might provide could only be observed in the more susceptible variety of alfalfa. In highly resistant varieties, Stamina® may not provide much added benefit to ARR management.

We are curious if similar results might be observed in the field. Therefore, we are conducting a Stamina® seed treatment trial in the 2014 growing season. We are planting replicated field plots of a known A. eutieches race 2 susceptible alfalfa variety treated with Stamina®,or not treated.  This will be conducted at the Lancaster Agricultural Research Station in a field with a confirmed A. eutieches race 2 population. Stay tuned for results of this trial later this season.