You are here: Home / Virus Look-a-Like Symptoms in Soybean

Sometimes abnormal growth on soybean can look very similar to soybean mosaic virus (SMV) giving the leaves a somewhat bumpy and rippled appearance (Fig. 1).  However, further investigation can yield clues that the cause of the symptoms is not SMV.  Samples coming into the diagnostic lab often lack few symptoms of virus but exhibit symptoms of growth regulator herbicide injury.

Alfalfa mosaic virus (AMV; Fig. 2) and Bean pod mottle virus (BPMV; Fig 3) have also both been observed in soybean fields in Wisconsin.  However, SMV is typically identified in only a few fields each year.  This isn’t to say that SMV isn’t out in fields in Wisconsin, we simply don’t see widespread symptoms or positively identify the presence of the virus in many fields each season.  Keep in mind the following points about these three viruses of soybeans: 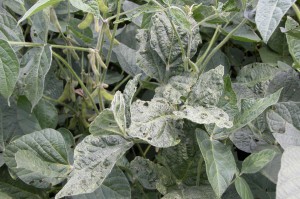 Soybean mosaic virus can be transmitted in seed (Hill, 1999).  Aphids can also transmit SMV.  Yield loss from SMV infection can be as high as 66-86% in susceptible cultivars (Hill, 1999).  Symptoms of SMV can vary from leaf deformation, to more pronounced mosaic symptoms, and reduced pod yield or malformed pods.  Symptoms can be less severe at moderate temperatures (~75 F) and non-existent at high temperatures (>86 F).  Management includes using SMV-free seed and also planting late. 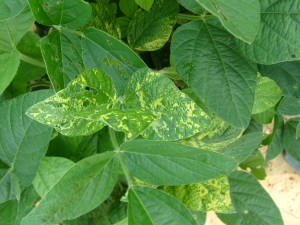 Alfalfa mosaic virus is transmitted in low levels in soybean seed (Tolin, 1999).  Aphids transmit AMV.  Symptoms of AMV can vary from localized dead lesions on leaves, to large areas of yellowing.  The impact of AMV infection on soybean yield is unknown (Giesler and Ziems, 2006). 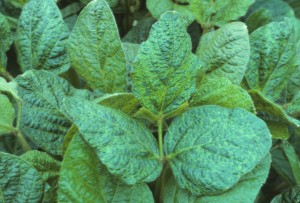 Regardless of the viruses present this year, most symptoms on soybean plants being sent to the diagnostic lab are mostly not indicative of the viruses described above.  While symptoms included some bumpiness on the surface, most of the leaves on the plants exhibited cupping, strapping, and shoe-stringing which is more indicative of growth regulator-herbicide injury.  In addition, the incidence (number of plants exhibiting symptoms) within fields this year in Wisconsin is often very high (>75%).  Giesler and Ziems (2006) conducted a survey of AMV, BPMV, and SMV in Nebraska in 2001 and 2002.  In that survey it was possible to find an occasional field with incidence of these viruses as high as 90-100%.  However, the majority of fields that tested positive for one or more of these viruses, had incidence levels of 50% or less.  High incidence levels (>50%) are considered unusual for these viruses in soybean fields.  Therefore, incidence of leaf cupping or other abnormal leaf growth at incidence levels of 90% or 100% are more likely suggestive of an abiotic disorder, such as herbicide injury.

Figure 4. Leaf epinasty and cupping as a result of injury by a growth regulator herbicide. Photo Credit: Craig Grau.

While insect vectors can transmit these viruses, thereby increasing observed incidence in the field, it isn’t likely that insects have played a major role this season in transmission.  Soybean aphid populations were approaching economic thresholds in the southern portions of Wisconsin in June and early July.  However, once cooler, wet weather moved in, populations have fallen to nearly non-existent.  The same has been true for other insect vectors this season.  So again it is unlikely that significant transmission of viruses via insect vectors has occurred. 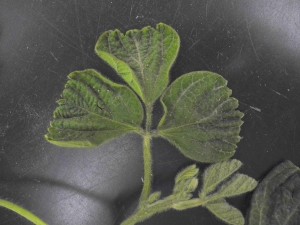 Mild to severe leaf cupping and epinasty are suggestive of damage from a growth regulator herbicide (Fig. 4).  Growth regulator herbicides commonly used in corn and other grass crops include 2,4-D, dicamba, and clopyralid. Damage can occur on soybean after being exposed by these herbicides through spray drift during nearby applications or by carryover from an application in a previous crop on the same field. In seasons following years of drought, herbicide carryover might play a larger role in contributing to abnormal soybean growth. Issues from drift during the mid-season would most likely come from 2,4-D or dicamba products, whereas damage from carryover are more likely to be from herbicides containing clopyralid.  In addition to herbicide damage from growth regulator herbicides, several samples from counties in the northern soybean production tier of the state have also been sent in exhibiting “shoe-stringing” or “draw-stringing” symptoms (Fig. 5). These symptoms are commonly observed when conditions are cool and wet after chloroacetamide herbicides like S-metolachlor, acetochlor, or diamethenamid are used as pre or post-emergence herbicides to soybeans.

To learn more about herbicide carryover visit, http://corn.agronomy.wisc.edu/Management/pdfs/A3819.pdf, to download a PDF of a UWEX fact sheet.

To learn more about dicamba injury on soybean click on this link, http://ipcm.wisc.edu/download/pubsPM/dicamba2004.pdf.

Information on other types of herbicide injury can be downloaded at this link, http://ipcm.wisc.edu/download/pubsPM/herbicideinjury_new.pdf.