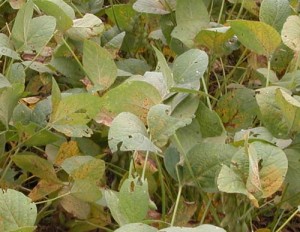 Asian soybean rust is caused by the fungus Phakopsora pachyrhizi. The soybean rust pathogen has been moving progressively westward from its center of origin in China and has now reach North America. There is much speculation and apprehension on how soybean rust will develop and impact soybean production in the U.S. The reality of the situation is that soybean rust has been a devastating disease in many parts of the world. Thus, it is prudent that we respect its potential to reduce yield, and be prepared to manage it each season.

Soybean rust is monitored each season in a national sentinel plot monitoring effort. The main goal of the sentinel plots is to detect soybean rust at low levels and  provide early warning for soybean producers. Over 30 states have joined this sentinel plot network that utilizes trained observers to look for signs and symptoms of rust on soybean, dry beans and kudzu.  Most Wisconsin soybean growers will have a sentinel plot within their county or will border a county with a sentinel plot.  The plots are monitored  through the combined efforts of UW county extension agents, agriculture research station staff, and UW-Madison campus research staff.  The results of the sentinel plot observations are posted on the USDA Pest Information Platform for Extension and Education (PIPE) website.

Will soybean rust occur in Wisconsin this year?

Rust spores are light and easily disseminated by winds over large geographical areas. The pathway shown here is similar for that of other rust diseases found on grains, and serves as a model for likely soybean rust movement from south to north.

There are three key factors in determining the risk of soybean rust movement into northern soybean production regions:

The soybean rust pathogen has not been shown to be moved with soybean seed.  Thus, growers should not be reluctant to purchase seed grown in regions where soybean rust developed the previous growing season.

Accurate and timely diagnosis of soybean rust is critical to achieve control of soybean rust, especially if fungicides are involved in the management plan. If national monitoring efforts indicate that rust spores are moving northward, soybean growers and crop advisors should plan to scout frequently for rust. Scout these areas first:

Inspect leaves on site to avoid disseminating spores. Use a 10X or 20X hand lens to view symptoms. Rust is most likely to appear on the areas of the leaves that stay wetter longer: the bottom of a leaflet and close to major veins. Backlighting may enhance the viewing of early symptoms.

Initial symptoms of soybean rust include small, gray spots, particularly on the undersides of leaves and along leaf veins. These can be visible on both sides of the leaf, and also on petioles, stems and pods. The spots increase in size over time and change color from gray, to tan, reddish-brown or black. It is important to recognize that these symptoms are not exclusive to rust. Other diseases of soybean including brown spot, bacterial blight, and particularly downy mildew can easily be confused with soybean rust. If symptoms are observed, the next step is to verify the cause. See Common Soybean Leaf Diseases and Asian Soybean Rust (pdf) for a good overview of look-alike diseases.

If symptoms are observed, that is a signal to look for signs of the pathogen. In the case of rust, look for evidence of sporulation. Tan lesions mature to form pimple-like structures called pustules on the lower leaf surface. Active pustules contain the powdery tan spores of the rust fungus. 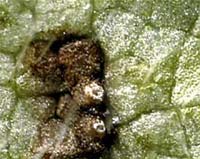 In the early stages of infection the emerging pustules look like miniature volcanoes topped with a pore.

In the early stages of infection the emerging pustules look like miniature volcanoes topped with a pore. There is no yellow halo surrounding the pustule. Later, the pustules “burst” releasing masses of spores. Use a hand lens to inspect the lower sides of symptomatic leaves for pustules that contain spores. These signs are diagnostic of rust.