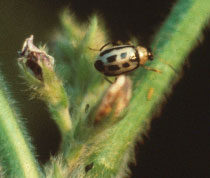 The bean leaf beetle (Cerotoma trifurcata) is a common soybean pest that can damage soybean by feeding on cotyledons, leaves and pods. Populations of bean leaf beetles have been increasing in the North Central region. Back-to-back mild winters have favored the survival of overwintering adults.

Colors and spot patterns of bean leaf beetles can range considerably. Therefore, careful attention is needed to distinguish these beetles from other important beetles found in soybean, such as the lady beetle.

Adult beetles overwinter under leaf debris near soybean fields. Once they become active in the spring they will feed on wild legumes, alfalfa and clover. Once soybeans begin to emerge, the beetles quickly leave these alternate hosts and concentrate on soybean. 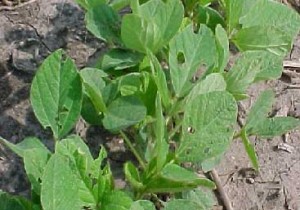 In addition to the physical damage from feeding on soybean, the bean leaf beetle is also a vector of bean pod mottle virus (BPMV). The insect feeds on infected plants and transmits the virus particles to the next plant on which it feeds. Virus transmission can occur at any growth stage, however early infection poses the greatest risk of yield loss.

Insecticides are available for control.  Treatment thresholds, for defoliation only, varies according to crop value and treatment cost.  For VC to V2 soybeans the threshold varies between 2 to 10 beetles per plant. Synthetic pyrethroid insecticides tend to provide the most consistent bean leaf beetle control. 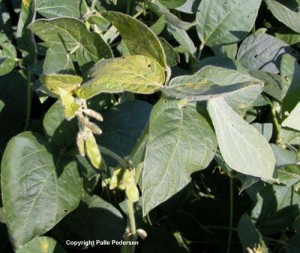 Treatment thresholds for prevention of bean pod mottle virus are not yet available. However, consider these criteria before treating: